If you’re #MissingLove, you still have three days to find it.

As Valentine’s Day quickly approaches, hopeless romantics search for their other half. New Yorker Maria Luisa Portuondo Vila is no different. After locking eyes with a hipster hottie in November, Ms. Vila decided to pursue this mystery man from the A line. She posted flyers allover of the unknown gentleman with a sketch of him as well as a description. Wearing a top hat with hair below his chin, he kind of looks like John Lennon. She describes him as being 6’1″ wearing yellow pants and a denim jacket. She also notes what she was wearing at the time: grey pants and a green jacket.

Pay atention NY this is not art auction @untappedcities this is #missinglove and this is about my heart!!!!! #IwontstopuntilIfindyou

Ms. Vila is a New York installation and performance artist, according to her Spanish Twitter, who started #MissingLove with designer Andy Dockett. She is part of the art collective called the Laboratorio Escénico. Some, however, are skeptical that her penchant for art indicates that this is nothing more than a performance. She is adamant that love is at stake.

Many passersby want to help Ms. Vila find her prince charming by sharing her posters and tweeting #MissingLove.

Cutest thing ever wow! She’s really looking for a person she met on the subway to be her valentine 😢💘 #missinglove pic.twitter.com/Kgsoj8rnnJ

But some realists aren’t as hopeful that this is a match made in heaven.

#missinglove posted all over the subway. My only thought was this guy probably has a GF and she’s probably laughing. pic.twitter.com/1tBEveEPkY

Either way, Ms. Vila will not give up her search. Like many of us, Ms. Vila still believes anything can happen in a New York minute. 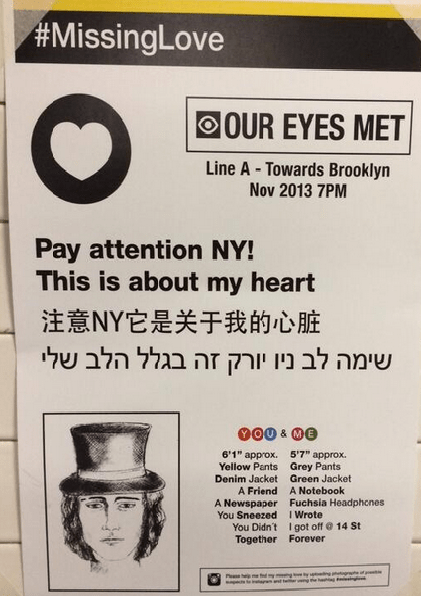