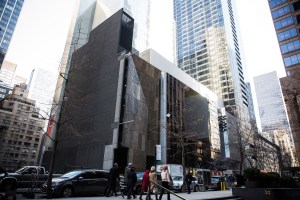 Though the Museum of Modern Art will demolish the building that housed its former neighbor, the American Folk Art Museum, MoMA’s director, Glenn Lowry, said today, in an interview with The New York Times, that the museum will preserve and store the Folk Art museum’s distinctive copper-bronze facade.

“We will take the facade down, piece by piece, and we will store it,” Glenn D. Lowry, the director of the Museum of Modern Art, said in an interview last week. “We have made no decision about what happens subsequently, other than the fact that we’ll have it and it will be preserved.”

Thanks to Greg Allen for pointing us to the story.