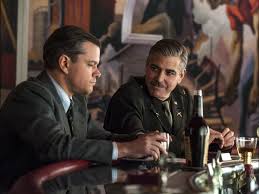 George Clooney does a pretty good job of protecting art in the new movie Monuments Men (Rotten Tomatoes score: 34%), but Robert Edsel, the author of the book the movie is based on, thinks drones should be used in Syria to protect the cultural artifacts there.

Putting forth the idea at a talk after a screening of the movie, Mr. Edsel based his idea on the Amazon marketing campaign that proposed drone package delivery (something that will obviously never happen). Via The Independent:

“What can we do? We’re not using technology very well. We have drones that Amazon is trying to use to deliver packages,” he said. “ Maybe we could put cameras in those things and start taking photographs of all those bad guys… And hold people accountable and prosecute them.”

Drones! Is there any problem they can’t solve? Besides the U.S. government’s excessive use of drones, I mean.