Here’s my actual summons for running in Central Park this morning “before the park opened.” SMH. http://t.co/cWDRl3Bkoi

Runners have joined jaywalkers on the NYPD’s to-ticket list.

CEO Peter Shankman was issued a summons for running in Central Park too early in the morning, Gothamist reports.

Mr. Shankman, who is an “author, entrepreneur, speaker, and worldwide connector,” and founder of Help a Reporter Out, was stopped by cops around 4:30 a.m. on Thursday near 85th Street on the park’s East Side.

I just got a SUMMONS for running in Central Park at 430am “before it opened.” ARE YOU FREAKING KIDDING ME NEW YORK CITY?

He was training for the Ironman Triathlon and getting his 10 miles in before his morning meeting, Mr. Shankman wrote on Facebook.

But apparently, Central Park is closed between 1am and  6am, making his early morning run a criminal act.

Mr. Shankman claims there were no signs, gates, or traffic cones indicating that the park was closed.

“Note – Running in the park. Not ‘performing sex acts for crack,’ or ‘laying down explosive charges,’ but ‘running.’ Because apparently, a 215 pound man running through Central Park at just over a 9:10 pace is a threat to Manhattan,” he posted on Facebook.

Mr. Shankman wondered why a simple warning was not sufficient, but it was clear to him that the officer’s boss was in the car pressuring him to write the ticket.

The hardened criminal plans to fight what he believes is a bogus charge in court in May.

“And therein lies the irony—I was trying to get in better shape—exactly the point of all the other laws the last 12 years have seen, from no smoking in bars to no big gulps full of sugary sodas,” he told Gothamist.

Next time he should just run faster to lose the cops. 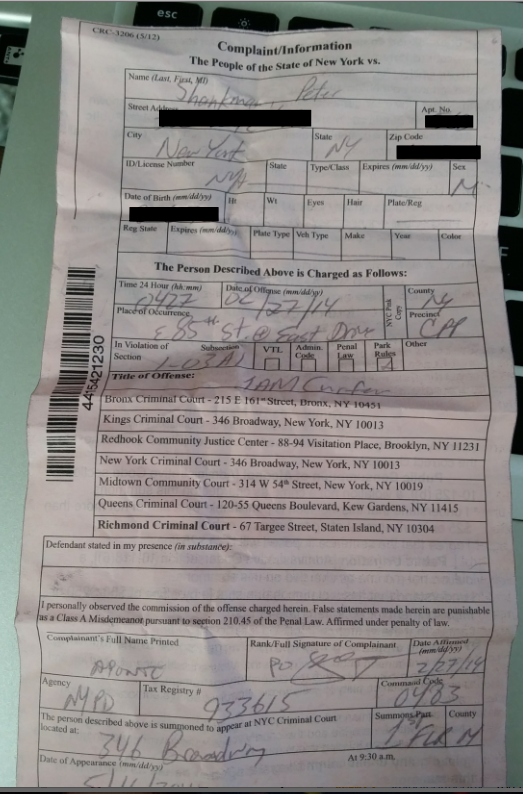