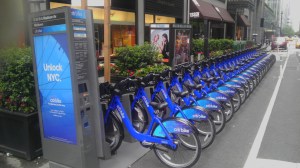 “Michael Rockefeller WAS eaten by cannibals who kept his bones as souvenirs, claims journalist who says his years of research proves that the Dutch covered up 1961 murder in New Guinea.” (He was there researching art.) [Daily Mail]

Laure Provost, who currently has a show at the New Museum, “is still something of a mystery in New York.” [NYT]

D.C.’s Corcoran College of Art and Design andNational Gallery of Art, which recently announced a merger, will start their collaboration early with a Sol LeWitt drawing. [The Art Newspaper]

The Museum of Arts and Design has named a new deputy director. [Artforum]

Frances highest court finds in favor of the author of Cubist painter Jean Metzinger’s catalogue raisonnée. Meanwhile stateside, a new bill going up for ratification in the summer would give better protection to art specialists who “speak out in the case of doubtful works.” [FT]

In case you missed it: Xu Zhen will turn 10 Citi Bikes into “ridable works of art” during the Armory Show. [NYT]

Toledo Museum of Art is reviewing a number of items it obtained from an antiquities dealer accused of smuggling. [NYT]