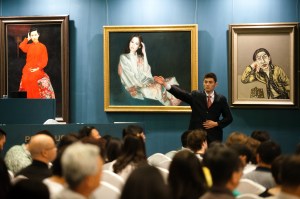 The culture division of China’s Poly Group Corporation, which has been a dominant auction force in that market, plans an IPO. [NYT]

Louisville, Ky.’s Speed Art Museum has discovered a Paul Klee hiding on the back of another Paul Klee. [The Courier-Journal]

“With a gift of $250,000, [Jan] Dilenschneider is creating a fund for scholars in the arts who are denied freedom of expression in their professional career. The Janet Hennessy Dilenschneider Rescue Fund Award in the Arts will be given to artists outside the U.S.” [WSJ]

Robert Wittman, the founder of the FBI Art Crime Unit, gives some tips on not having your art stolen. [WSJ]

Comic book artist Alex Ross is the subject of a show at the Mona Bismarck Center in Paris. [WSJ]