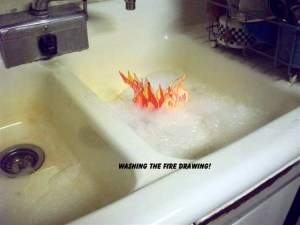 A photograph by artist Gene Beery. (Courtesy the artist/ABAB)

“A new study challenges Congressional assertions that grants by the National Endowment for the Arts support programming attended mostly by the rich.” Great to hear. No doubt we’ll be seeing major GOP support for the NEA going forward. In related news: the NEA has been sans director for more than a year. [NYT]

There are mixed opinions about MoMA’s plan to open its sculpture garden to the public. [NYT]

Following all the hubbub, here’s a profile of Dave Hickey. [Los Angeles Times]

“Christie’s has withdrawn 85 artworks by Spanish surrealist Joan Miró from its auctions in London this week, after an uproar in Portugal over the government’s move to sell the works in an attempt to cut its debt.” [WSJ]

“Money-laundering, tax evasion and the illicit transfer of cultural heritage objects”–the usual–“could be factors explaining large discrepancies that have emerged in an analysis of art shipments between China and the U.S.” [The Art Newspaper]