Alec Baldwin caused quite a splash with a New York mag cover story, which went up last night. The actor said he is done with public life and explained why his MSNBC show failed, why New York is different now, why he lashed out at paparazzi, why he isn’t really a homophobe and basically anything else he has thought about over the past year. And while he understands the irony of ranting about the media in a magazine, he says “this the last time he’s going to talk about his personal life in an American publication ever again.” Out with a bang, we guess. (New York)

Both tabloids agree on Alec Baldwin’s anti-New York rant. If he hates New York so much, he is free to leave. (Daily News/New York Post)

Piers Morgan’s primetime time slot on CNN is ending after three years. The British host who replaced Larry King never had the ratings or quite connected with the audience. He is, as David Carr points out, British. (The New York Times)

Ronan Farrow will get some help from data ninjas for his new MSNBC show: the network is partnering with Vocativ. (The New York Times)

In other unexpected partnerships: The Atlantic is partnering with Salt Lake City newspaper The Deseret News for a four part series on fatherhood. (The New York Times) 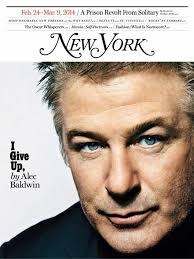 Filed Under: Media, Around the town, Media, News & Politics