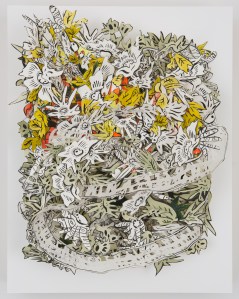 Like an arthropod ouroboros or giant blue jellyroll, the confection of painted and cut paper that Natasha Bowdoin has mounted against a 42-inch square of pristine white museum board and titled Atom A is coiled with a comfortable tension, ready to unfurl but in no particular hurry. Royal-blue lines undulate across the creature’s midsection like the ocean before God parted the waters, and from the crest of every wave protrudes an almond shape, like a hasty, wine-stained tongue, to form a quick black pupil. Argos was trying to keep his focus when Hermes relentlessly bored him to death, but Ms. Bowdoin’s eyes work like windows in reverse—it’s through their carefully cut away whites that we peer down to the next layer of paper, where reddish-orange swooshes leave some of the waves looking bloodshot. Beneath the swooshes, visible only in glimpses, is what looks like a topographical map. A squiggling white border divides the interior from the hedgehog-like bristle of tangent eyes around the outer edge, and the opaque white half-moon that transforms the whole transparent sea into a single Borgesian aleph was placed on last like a codpiece.

Cipher 1, Cipher 2 and Cipher 3, smaller pieces inspired by “The Library of Babel” (as Atom A and the other large pieces were inspired by, and use text from, 20,000 Leagues Under the Sea), pop up more, extending as far as 3 inches from their white backings with yellow seaweed, white flowers and orange and green leaves in dense, intricately constructed tableaux that literalize the magical artifice of compartmentalized pictorial illusion. Long strands of orange and gray cursive spiral around Cipher 3, and it’s hard to make out much of the writing as writing, but I could find, upside down and backward in the single, unpainted, player-piano-like reel of pointy letters in Cipher 1, the word “sleep.”

This use of illegible writing as a kind of devotional act, a way to channel the chattering mind into a larger project that has little to do with the content of the chatter, is more explicit in another large-scale piece called Diving Script. Row after row of cursive script is written in graphite, outlined in black to make the turns gentler and the line more generous, painted over in orange or yellow gouache, carefully sliced out and laid like decorative lace over a black-and-white jungle-cat pattern in a shape like a well-used keyhole or overcooked brioche.