BELLMAWR – State Sen. Donald Norcross (D-5) jumped full swing into a congressional campaign Monday morning as he officially kicked off his candidacy outside of Camden surrounded by union workers and a who’s who in South Jersey politics.

“Let’s get to work,” declared Norcross on stage inside a Bellmawr VFW post with Senate President Steve Sweeney and the co-chairman of the Camden County Democratic Committee, state Sen. James Beach (D-6), near his side.

“I’m running for Congress because South Jersey needs to continue to have an effective advocate,” said Norcross, describing himself as a middleclass New Jerseyan who knows what it’s like to collect an unemployment check and struggle to provide for a family.

Norcross, who also serves as the co-chairman of the Camden County Democratic Committee, joined the state Legislature in 2010. He spent the last 15 years working as the assistant business manager of IBEW Local 351.

“Donald is one of us,” said Sweeney, the state’s top lawmaker.

“I can’t believe an ironworker saying such nice things about an electrician,” joked Sweeney, a childhood friend of Norcross and his three brothers.

While Sweeney and Beach (along with Camden Mayor Dana Redd and fellow congressional hopeful and Burlington County Freeholder Aimee Belgard) shared the stage with Norcorss, the state lawmaker has no lack of official endorsements from additional federal, state, county and local elected officials.

“It’s about my message,” responded Norcross, after a reporter asked whether political onlookers could surmise from the long list of endorsements that his older brother’s influence was at play.

“I think what you saw today is the outpouring of support from not only the 5th district but South Jersey people for all the years I’ve work in this area. I think, quite frankly, it’s about my message,” Norcross said.

“I’ve been elected now, four times in the last five years. Clearly, the constituents and those residents in the district see what I’ve done and they are approving,” he said.

And on the possibility of a Philly sports radio host and former NFL linebacker, Garry “G” Cobb, jumping into the race on the Republican ticket?

“Well, we live in America,” he said. “If he wants to run, I think he should. I believe my message will get out and if the voters approve, hopefully I’ll be the next congressman.” 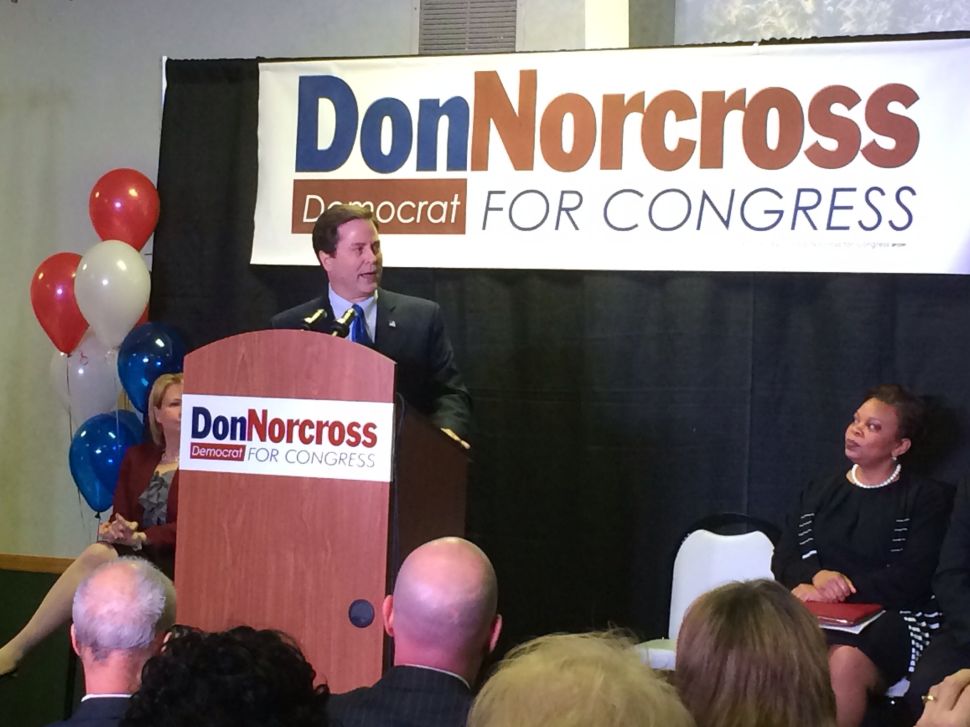