PERTH AMBOY – Senate President Steve Sweeney’s appearance in North Jersey Wednesday came with a blistering attack on Gov. Chris Christie and his response to Superstrom Sandy in the past 18 months – but there was more.

The event, which centered on kicking off his Sandy Bill of Rights legislation, provided the South Jersey Democratic lawmaker another opportunity to forge relationships with North Jersey officials as he embarks on what many believe is a slow build up to a gubernatorial race.

“I think that he’s been at the forefront of many of the issues and he’s stepped up to many of the challenges (facing people of the state),” said Perth Amboy Mayor Wilda Diaz, who expressed gratitude toward the top lawmaker for choosing her city to kick off his Sandy recovery awareness campaign.

“Someone has to take the charge and it’s great to see the Senate president doing it,” she said. “It says a lot.”

The mayor was among three people who surrounded Sweeney as he stood at the lectern inside Perth Amboy’s historic Town Hall. He was joined by U.S. Rep. Frank Pallone (D-6), a fierce critic of the Christie administration along the Sandy recovery, and Assemblyman John Wisniewski (D-19), the Middlesex County lawmaker who’s leading the legislative charge into investigating the governor following the George Washington Bridge lane closure controversy.

“Everyone that was here today is addressing the issues affecting the lives of every resident in the state of New Jersey,” said Diaz, referring to not only Sandy recovery but broader state issues, including the economy. 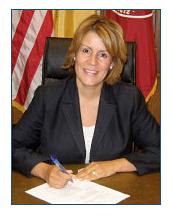