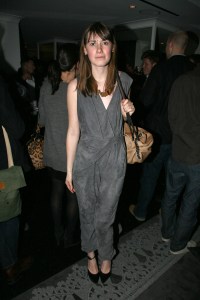 The curator Piper Marshall has left the Swiss Institute, where she recently curated a show our own Will Heinrich liked quite a bit, “Descartes Daughter,” to pursue bigger and better things. (Here’s a profile of The New York Times from an earlier project of hers.)

In an email that went out to her work contacts today she wrote:

I wanted to share some news with you that I’m letting people know about just now. After six invaluable years with Swiss Institute and the SI team, I have decided to step down as Curator in order to pursue freelance projects. I am extremely grateful to the SI Board, former Director Gianni Jetzer, and the SI team for nurturing my growth and challenging and refining my role as a curator of historically significant art and immensely talented artists such as John Armleder, Miriam Cahn, John Chamberlain, Hanne Darboven, Jimmie Durham, Malcolm McLaren, John Miller, Mai-Thu Perret, Karin Schneider, Jean-Frédéric Snyder, Charline von Heyl, and Lawrence Weiner, as well as emerging artists Malin Arnell, Rochelle Goldberg, Lucas Knipscher, Jason Loebs, Ulrike Müller, Carissa Rodriguez, Sergei Tcherepnin, and Hannah Weinberger.

It is with thanks to the support of Gianni that I curated the group exhibition Descartes’ Daughter, as well as the first institutional presentations of DAS INSTITUT (Kerstin Bratsch/Adele Roder), Mae Fatto, Ryan Foerster, and Greg Parma Smith.

Over the past years I have also been lucky enough to work with several other artists that I admire (Antoine Catala, Ida Ekblad, Dan Graham, Jon Kessler, Olivier Mosset, Sean Paul, and Alan Uglow) on projects in collaboration with Blum & Poe, New Jerseyy, Three’s Company, and at Écal, among other venues. I look forward to continuing engaged conversations with all of them. I’m excited that curating at Mary Boone Gallery will be my first freelance endeavor, among others. I am thrilled to be editing and launching the reader Descartes’ Daughter, co-published with Swiss Institute and Sternberg Press. It will be released this Spring and will feature Fionn Meade, Jenny Jaskey, Melanie Gilligan, and Kari Rittenbach. I look forward to continuing my work as critic for Texte zur Kunst, Spike, The Third Rail, and artforum.com.

Swiss Institute just named a new director, Simon Castets, so as with any shake-up, departures are expected. As you can see, though, Ms. Marshall is not lacking for other things to do!