“I have decided that I am endorsing Bonnie Watson Coleman because of her very solid record in Trenton,” the mayor told PolitickerNJ.

A former New Democrat who forged an alliance with establishment Democrat Assemblyman Jerry Green (D-22) en route to defeating incumbent Sharon Robinson-Briggs in last year’s mayor’s contest, Mapp said he does not know whom Green will endorse in the developing CD 12 Democratic Primary.

For his part, “I have every confidence that we are going to bring along our members,” the mayor said.  “I’m hoping the same can be said for the rest of Union County. I am confident my endorsement will have a significant difference in terms of what will come out of Plainfield. Plainfield will be a force in the election. We will do all we can.”

Mapp’s full statement is printed below…

“The decision by Congressman Rush Holt not to seek re-election puts two issues on the front burner for New Jersey Democrats in the 12 Congressional District: finding a replacement who will uphold his high standards in the House of Representatives and electing a person who will have President Obama’s back in the contentious Washington political scene.

“Bonnie Watson Coleman fills the bill on both counts.

“Bonnie is a strong and unwavering supporter of Democratic values, as can be seen from her stands on guns and gun violence as well as her fight for raising the minimum wage. As chair of the Education Committee, Bonnie appreciates the difficulties of giving urban youngsters such as Plainfield’s an education that will outfit them with the skills to succeed in life and be positive forces in their communities.

“Like me, Bonnie did not hesitate to give her full support to Barbara Buono in the race for governor last year, when many Democrats stood silently by and some were even coerced into supporting Chris Christie. That was never an option for Bonnie Watson Coleman, nor was it for me or the Democratic voters of Plainfield.

“Bonnie also has ties to the Plainfield community, which her husband Bill served for several years as an interim pastor at the city’s First-Park Baptist Church and as a member of St. Mark’s Episcopal Church.

“I believe Bonnie Watson Coleman is the right choice to carry forward the progressive record of Rush Holt. She has shown herself knowledgeable on the issues facing New Jersey cities such as ours and at the same time watchful of the needs of all New Jerseyans. I am proud to endorse her as the Democratic candidate for the 12th Congressional District seat.” 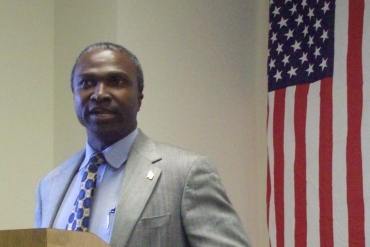