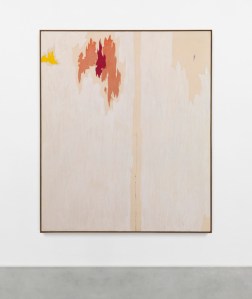 It’s fashionable these days to bash mega galleries for supporting empty, overwrought spectacles, and while those empty, overwrought spectacles are a problem, I still shudder to think of a world without the megas. Buoyed by vast fortunes and competing with their elite brethren for the same few billionaire clients, they now regularly assemble shows rich with treasures, no expense spared, that the public gets to visit, free of charge. Hauser & Wirth’s display of works from the collection of Reinhard Onnasch, a German-born dealer who ran a New York gallery in the 1970s, is the latest of these museum-quality shows. Organized by former Museum of Contemporary Art Los Angeles chief curator and current Hauser & Wirth partner Paul Schimmel, it arrives on our shores after a stop at the gallery’s London branches.

The show forms a solid, complicated picture of vanguard American art from the 1950s through the ’70s, albeit a selective one, the result of one collector-dealer’s taste. The show opens with one of most incredible rooms of postwar painting I have seen in a New York gallery in recent years: two huge, pitch-perfect Clyfford Stills, Kenneth Noland and Morris Louis color fields and a breathtaking 18-foot-long painting by Barnett Newman called Uriel (1955), an expanse of mint green separated from a slice of chocolate by the thinnest of white and black zips. 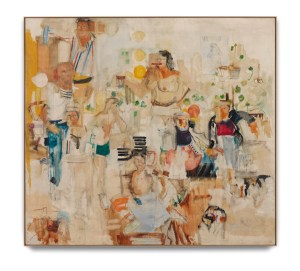 Larry Rivers’ monumental The Journey (1956) ushers the way into Pop, as beastly figures—friends and lovers—begin to appear within his abstract marks. Pretty soon, you’re taking in seven primo Claes Oldenburgs—an oversize plywood plug, paint-splattered dresses (pink and white) on plaster and a melting vinyl medicine cabinet, among them. There’s a heartbreaking Cy Twombly, Leda and the Swan (1962), marked with all sorts of intimate scrawls, and a careful, quiet Robert Rauschenberg, Pilgrim (1960), with a chair affixed to it. When one of your only complaints about a show is that its two choice 1962 John Wesleys are on the plainer end of his spectrum, you’re quibbling.

But one real complaint is that among the 59 works, there is just one by a woman, revealing the collection as a relic of another time. Mr. Onnasch showed few female artists. (One was proto-appropriation artist Elaine Sturtevant, whose work would have looked great here.) As it is, the lone woman whose work is on view at Hauser & Wirth is the late, great Hanne Darboven, a master of conceptual and process art, whose framed drawings have taken over two long expanses of wall. Her repetitious mark-making (line after line of squiggles, each page hand-numbered) makes this composite piece yield a sum far greater than its 424 parts. That artwork shares a room with two of the show’s finest surprises: a group of assemblages by the Californian Ed Kienholz and some Fluxus objects by George Brecht. Also a pleasure are a group of luxuriously ramshackle constructions by Richard Tuttle from the 1980s and early 1960s paintings by Jim Dine that ooze paint and earthy charm.

The exhibition’s grand finale is a superb, threatening Richard Serra, 1983’s Do It, which consists of one gigantic steel plate propped gingerly atop another in a corner. In a coincidence made possible by the mega galleries, you can pick up the Serra story at a solo show just north of Hauser & Wirth, at a branch of Gagosian Gallery.