It would be nice to believe that the fashion industry is becoming a little bit less racist, if only because the standards for being progressive are so absurdly low. If you are in the industry, all you need to do is not put white models in blackface, perhaps feature a few models of color in your shows and … not post a picture of yourself grimacing while eating fried chicken on Instagram that wishes people a happy Black History Month.

That all seems so easy. That seems like a normal code of behavior, like not yelling obscenities on the street corner. But then there are always vacuous nincompoops like Elana Rosenblatt, a producer at environmentally sustainable fashion brand Reformation, who somehow can’t manage that.

We can put aside the fact that Ms. Rosenblatt likely has very little sympathy for a group of people that has been persecuted in American history up until … always. African-Americans are persecuted in large and small ways essentially all the time. But there are lots of monstrous people in the world, and her attitude needn’t really concern anyone who isn’t interacting with Ms. Rosenblatt personally.

What’s more galling is her abject stupidity. Now, it’s possible that Ms. Rosenblatt somehow thought that Instagram was a private place, where only you and your monster-friends could see the pictures you post.

In that case, she is an idiot.

It’s also possible that she thought that this was an edgy move. Sometimes, high schoolers like to post pictures like this, because they are under the delusion that the rules that apply to polite society do not apply to them. They think that proving that they don’t behave the way decent people behave will make them more interesting. It is usually something people grow out of when they realize it will only succeed in making wholes swathes of people hate them. But I suppose not everyone grows out of it. So perhaps that’s why Ms. Rosenblatt posted such a picture.

In that case, she is an idiot.

So, don’t be an idiot. That’s the moral here. Don’t be a morally abject racist either, if you can avoid it.

CORRECTION and AMPLIFICATION: An earlier version of the story gave an incorrect title – Ms. Rosenblatt is a producer at Reformation, not CEO. Ms Rosenblatt’s representative also noted to the Observer that the post “was removed as soon as Elana realized it might cause offense.” The representative also stated that Ms. Rosenblatt composed the original post while she “was at a party at an African American friend’s house.” At 3 pm on Saturday, some 36 hours after the original posting, Ms. Rosenblatt posted a thoughtful and sincere-sounding apology on her Facebook page, noting “I celebrate and respect all people regardless of race and I would never intentionally discriminate against anyone.” 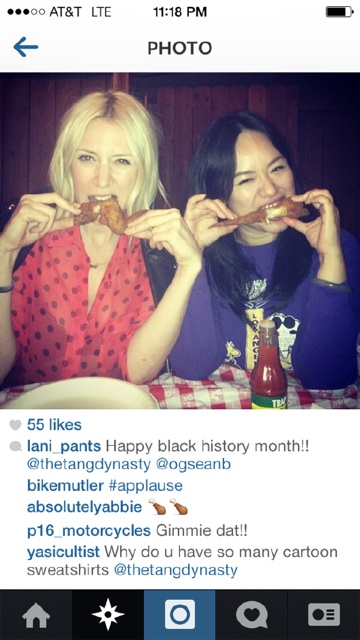