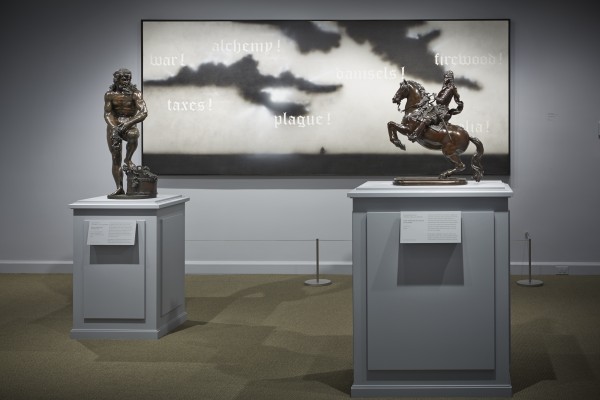 For a limited time, you can find Hercules, naked, in the basement of the Frick Collection. He’s holding aloft and crushing the murderous Antaeus in his bare arms in a captivating bronze from around 1460 by the Florentine artist Maso Finiguerra. In another bronze, from around 1600, by the meticulous Florentine goldsmith Antonio Susini, working from a cast by his master, Giambologna, the classical hero straddles a centaur, snapping its back with his left hand while bringing down a club with his right. Yet another bronze, an early-18th-century work by Giuseppe Piamontini, also of Florence, has Hercules relaxing atop a ferocious-looking, writhing Cerberus, his calm mien letting you know the three-headed dog is really no big deal. These artworks come from the collection of New Yorkers Janine and J. Tomilson Hill, who have loaned to the Frick 33 immaculate bronzes (seven of Hercules), most of them only about a foot tall, plus four post-WWII artworks, marking the first time that the museum has hosted contemporary art. The exhibition will bowl you over.

The Hills have focused on Florence-based artisans, particularly Giambologna, who is represented here by 10 works, some cast from his models by followers, like Girolamo di Zanobi Portigiani, who offers a horse and bull (from the 1570s), both prepossessing, caught mid-step, ready to charge. Also from Piamontini is a 2-foot-tall, 1717 bronze of a sumptuously bewigged and attired Ferdinando de’ Medici, Grand Prince of Tuscany, astride a rearing horse. A faint undercurrent of camp (move it a few blocks over to the Whitney, and you’d figure that Jeff Koons was responsible) is drawn out by the nearby hanging of Ed Ruscha’s 1988 painting Seventeenth Century, a stormy sky teeming with black clouds, outlined in electric white, and exclamatory phrases in an Gothic font: “melancholia!” “plague!” “damsels!” 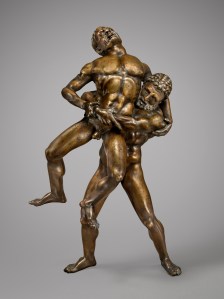 In the upstairs cabinet gallery, Jesus is the star. In the hands of the Baroque-era German-born Hans Reichle and Rome-based Alessandro Algardi, he is depicted suffering at the column and on the cross. In a wildly glazed, rough-hewn terra-cotta made in 1950-52 by the Italian artist Lucio Fontana, which serves as an ideal counterpoint to the perfect curves and sheen of the bronzes, an abstract body of Christ is burning wildly.

Throughout the show, its curator, Denise Allen, expertly plays newer and older works off against one another. Downstairs are a pair of rough-and-tumble works by Cy Twombly, a 1970 chalkboard with uneven, swirling white lines on gray and a superb, intimately marked 1959 painting on white ground. Standing in stark contrast to the finely wrought bronzes, they hint at some of the chaos and turbulence that would hit art in future centuries and the ways in which artists would push art and figuration into new and more abstract territories.

And yet, even in the pristine, classically minded sculptures, there linger terrors that feel achingly contemporary, as in Willem Danielsz van Tetrode’s late-1560s Mars Gradivus. The god may be immortal, but shifting his weight forward, wielding his unspeakable power, his face has turned fearful, filled with what reads as deep existential dread.