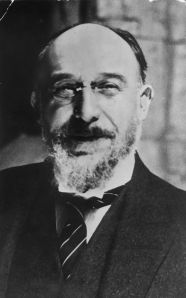 Today three brave pianists, taking turns, are making their way through Erik Satie’s gargantuan 1893 piece Vexations on a piano set up in the Museum of Modern Art’s Bauhaus staircase. The work’s score calls for it to be repeated 840 times. A performance organized by John Cage at an East Village theater in 1963 ran for more than 18 hours. This performance kicked off at 11 a.m. (MoMA’s education department is tweeting the action.) The concert is in conjunction with curator David Platzker’s super rich exhibition “There Will Never Be Silence: Scoring John Cage’s 4’33”“—which looks at the influence of that eponymous piece on contemporary art and runs through June 22. (I reviewed it last month.)

John Cale was actually one of the performers at the 1963 performance and recalled the details in his autobiography:

“Between 9 and 10 September 1963 I was one of a relay team of pianists, under the direction of John Cage, who played Vexations by Erik Satie at Pocket Theatre, 100 Third Avenue near 13th Street, in 18 hours and 40 minutes. The 180 notes of this 80-second work were played 840 times. The whole thing was John Cage’s idea. The admission was $5, but members of the audience got a refund of five cents per twenty minutes, and those who stayed to the bitter end got a 20 cent bonus.”

In his new Sturtevant book, Under the Sign of [sic], Bruce Hainley uses a variety of sources to construct a pretty captivating account of the scene at that blowout concert. It sounds like quite a time. Andy Warhol visited for a while, and The Times sent a tag team of reviewers, and one passed out. (Really worth picking up Mr. Hainley’s book.)

Will the pianists finish all 840 repetitions today? According to MoMA rep, they’re scheduled to stop at 7:30 p.m., so it seems unlikely, unless they amp up the tempo.

Below, 10 minutes of Vexations.