Scott Stringer’s first major audit of city schools has revealed evidence of collusion among the dairy companies that provide milk to school children, Mr. Stringer told reporters at a press conference this morning.

Calling the DOE’s current milk contracts a “bait and switch,” Mr. Stringer alleged that behind-the-scenes deals may have driven school milk prices above the market rate.

“This morning I am releasing an audit that found the Department of Education failed to adopt proper safeguards and controls for awarding the contracts to companies distributing milk in our city,” Mr. Stringer said. A spokeswoman for the DOE did not immediately respond to a request for comment.

Mr. Stringer and his audit team argued that those contract changes were potential signs of collusion between the milk companies, which did not immediately respond to requests for comment. Mr. Stringer suggested that one contracting company had offered an “artificially high bid,” which pressured the DOE to accept a contract with another company. Once the DOE awarded the initial contracts in September 2008, the three companies worked together to alter their bids, redistributing the contracts and profiting as a result.

“DOE ignored red flags that its milk contracts may have been tainted,” Mr. Stringer said. “We see possible collusion when rival bidders become business partners within two months of being awarded contracts. Instead of doing its due diligence, DOE needlessly put taxpayers at risk.”

As evidence of the DOE’s failed oversight, Mr. Stringer presented the DOE’s only known investigation into its milk contractors: a handwritten note scribbled on a single piece of paper. In the “document,” a DOE investigator questioned measures Beyer Farms planned to take to ensure its survival. The note, according to Mr. Stringer, was ignored by DOE higher-ups. Beyer Farms went bankrupt in 2012, leaving the DOE scrambling for a new contractor.

Mr. Stringer said he had referred his findings to the federal Department of Justice “a couple of weeks ago” and has turned his focus to preventing similar deals in the future by urging the DOE to beef up its records database and step up reviews of suspiciously low bidders. 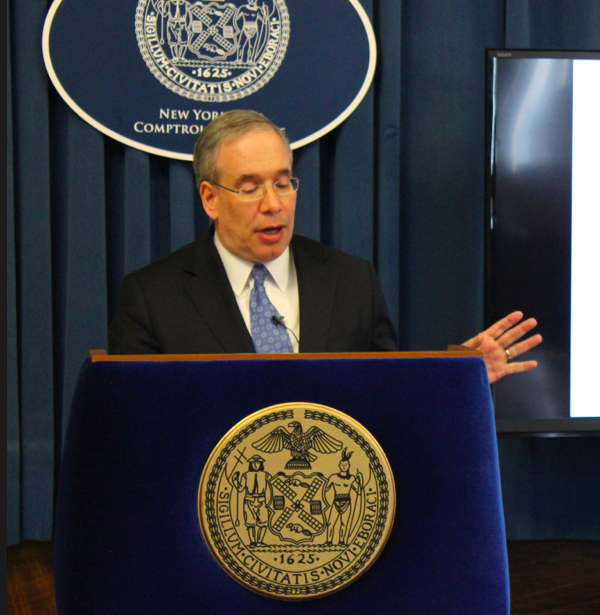