“After much deliberation and discussion with my family, I have decided against seeking the nomination for the 12th congressional district.  I am grateful to the voters who provided me with another four-year term, and I am committed to completing that term…

“I believe that I can be far more productive here in New Jersey addressing the needs of my constituents than I can be in Washington, D.C.  My heart is with my constituents and advancing our agenda of issues affecting our state.  The state issues I want to tackle over the next four years will make a greater difference in the lives of our residents than anything I can accomplish in Washington.  It’s difficult enough to work through New Jersey’s political system to enact meaningful legislation; however, the dysfunction in Washington makes that same task impossible.  Moreover, we have all witnessed that Congress is out of touch with main stream middle class interests and the day-to-day struggles of our citizens.  I want to empower our middle class and those who are disadvantaged, and I can do that more effectively at the state level.

“I want to continue to focus on reducing the widening of the income inequality gap in our state.  Last legislative session, I was able to shepherd through the increase in the minimum wage.  My first initiative this session is to continue my fight to restore the Earned Income Tax Credit for the working poor individuals and families struggling to climb the economic ladder.  I want to ensure that the building of a new Trenton Central High School stays on track.  I also made a commitment to my constituents to work tirelessly to make New Jersey more affordable for everyone, reduce property taxes, create jobs, and implement policies for a more transparent, accountable, and ethical government.

“I firmly believe that a woman’s place is in the House (of Representatives), and New Jersey has waited far too long to send a female representative to Congress.  It is most important that we regain that voice, which represents almost 52 percent of New Jersey’s population.  I also believe that the seat should be held by a Mercer County resident.  I am supporting our Assemblywoman, Bonnie Watson Coleman.  She shares our core Democratic values and has demonstrated strong leadership in the legislature throughout her political career.  She has been my running mate and has served as Assembly majority leader and state Democratic chair.  Her leadership experience locally and statewide has familiarized her with the needs of New Jersey and the 12th congressional district.  She has also worked tirelessly for Democrats at all levels of government; she has earned our support, deserves the nomination, and will win in November.” 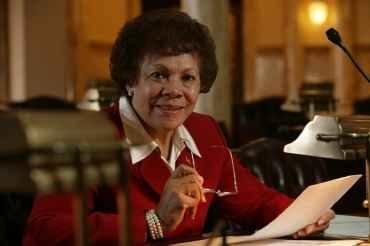