The New York Post is calling out The Daily News for hypocritically writing about the dangers of ice falling off of a building, even though a building managed by News publisher Mort Zuckerman’s Boston Properties is also dropping chunks of ice that (like all falling ice) is potentially dangerous.

But a midtown building developed and managed (it was sold last year) by Boston Properties is no better.

The Post reports that a “source who works at  Times Square Tower” confirmed “that ice shards began raining down from the 47-story building Friday.” And what’s more,  “the potentially dangerous deluge continued through Tuesday morning, the source said. But none of the heavily trafficked sidewalks nearby were cordoned off.”

The Post quotes two people on the street, one of whom said “it is dangerous” after she saw some ice fall from a building.

The other predicted that the falling ice could be dangerous. And it isn’t even limited to buildings managed by Mort Zuckerman’s Boston Properties. Other newspapers are implicated:

“Someone’s going to get really hurt,” New Jersey resident John Cho told the Post, “adding that he was nailed by a piece of frozen snow that fell from the nearby New York Times building.”

Wait, what? The New York Times is also endangering lives with frozen snow? Well, no matter. The Post is going after its long time rival here, not the Times. And even though we like a tabloid fight as much (if not more) than anyone, this issue seems like an odd one to push.

We’ll let it slide that the Post labeled the News “scoop-starved,” considering that the paper ran two big scare stories in a week about the dangers of falling ice. But since, in this case, the Post‘s scoop is about ice falling from a building managed by the News‘ publisher’s real estate investment firm, well….it seems like a lot of ice throwing all around. 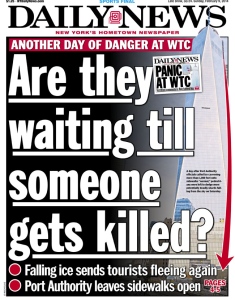