“We had a great dialogue over the past week, and the support for Assemblyman Chivukula was unanimous. I am proud of the open process we had and that our local leaders are united in this decision,” said Schaffer. “It ultimately comes down to who is going to best replace such an esteemed public servant as Rush Holt, and we strongly believe Assemblyman Chivukula will pick up right where Congressman Holt left off. From his assembly leadership on science and technology issues to his progressive record on the environment, Assemblyman Chivukula is without question the natural fit to succeed Congressman Holt. Furthermore, he brings a thoughtful and solutions-oriented legislative approach to the table, which is sorely lacking in today’s House of Representatives. Making the change from scientist Rush Holt to engineer Upendra Chivukula keeps this seat in capable and like-minded hands.”

“Governing in today’s global environment is a complicated and delicate process requiring legislators to understand the intricacies of both foreign and domestic issues. Assemblyman Upendra Chivukula possesses the unique worldview and vast experience necessary to keep this country strong. He will be an outstanding congressman,” added Vice Chairman Christodoulou.

A gratified Chivukula basked in the endorsement.

“I am grateful and humbled by the endorsement of the Somerset County Democratic Committee of my candidacy for the Democratic nomination in the 12th Congressional District.  When I came to this country, I could never have dreamed that I would be standing here today as an engineer, the Deputy Speaker of the General Assembly and a candidate for Congress.  It was the promise of America that propelled me to take the risk of leaving India to pursue an education and a better life.  This country has opened her arms and has given me the opportunity to live the American Dream. In 2012 I took another risk when I ran for Congress in the 7th District.  I stood with the Somerset County Democratic Committee to fight for the progressive values and ideals that have made America great.  We knew we were fighting an uphill battle in an extremist environment where Republicans were and still are obstructing real progress.  In 2012, we took a stand in the 7th District when no one else would, and I am proud of that.  I will fight in this campaign for real progress to solve real problems.  I will fight for the America that took me in with only $8 in my pocket.” 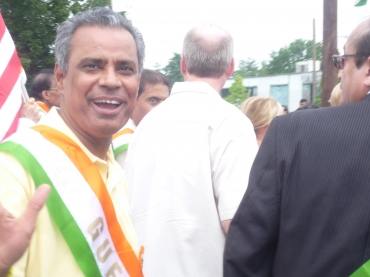