Now this is an apology that’s right on time.

A Metro-North conductor left passengers sorry notes after mistakenly directing them to an express train that never came, NBC reported.

“I told passengers to wait on the platform for the express train behind us,” he wrote in the note. But that express train never showed.

“I am as sick of apologizing to you as you are of hearing it,” Mr. Shaw wrote, addressing riders as “our friends and passengers” and admitting he was “shocked & furious.”

Mr. Shaw, who is the president of the conductors union (and possibly the only Metro-North employee who still cares), said that Metro-North often apologizes, but not for every problem. “I just did my own letter,” he said to NBC. “I know a lot of the passengers.”

Last year was one of Metro-North’s worst years, no doubt prompting a lot of apologies. A train derailed in Bridgeport in May, a track foreman was hit and killed by a passenger train two weeks later, and four people died after a train derailed in the Bronx in December. More complaints rolled in a month ago after nearly 200 commuters were stranded in Westport for two freezing hours.

Marjorie Anders, a spokeswoman for Metro-North shares Mr. Shaw’s concerns, but the agency said that the best, and only way, to communicate schedule changes to passengers is through email alerts and social media.

“Mr. Shaw made assumptions about train service based on his long experience, but Metro-North operations managers can and do make changes based on the conditions they encounter,” Mr. Anders told NBC.

Jim Cameron, commuter advocate, appreciated seeing a conductor apologize in writing. “That’s extraordinary,” he told NBC. “It not only speaks to the dedication of the employee but also the frustration they have with management and the embarrassment they have.”

“Like I tell my kids its ok to apologize for something buts its even more important not to let it happen again,” the note read. “I will never make this mistake again and I know its to late to fix Friday but wanted you to know how embarrassed and truly sorry myself and my crew are for the unacceptable incident.”

Some people on #MetroNorth still care. @Shawdogs65 left commuters an AWESOME letter this AM #thelittlethings pic.twitter.com/WkIA2cxA9Y 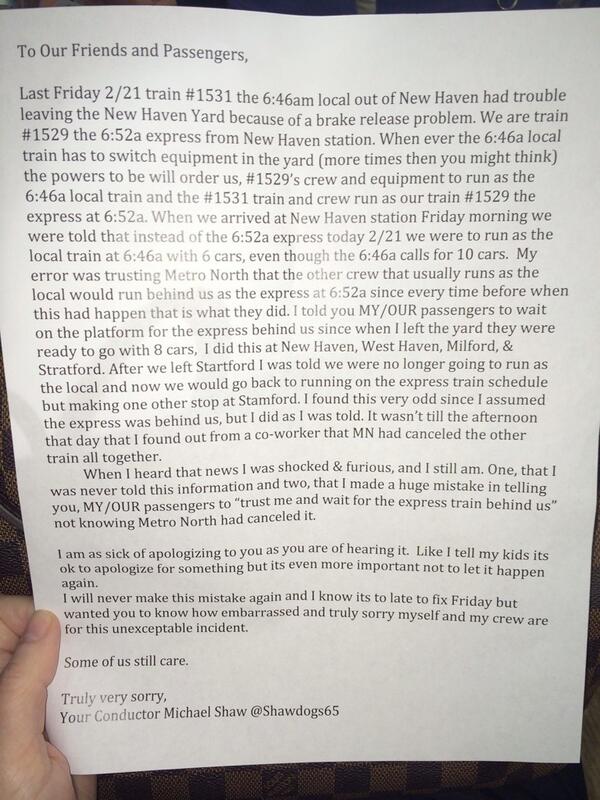