The temperature in New York is dropping, but panties are not.

Two thirds of Americans report that they don’t even try to maintain their normal sex life while experiencing cold and flu symptoms, according to a recent survey by the makers of EpiCor. Like, not even over the pants stuff.

The “2014 Cold and Flu Effects on Intimacy” survey, which was comprised of 500 responses through QuickSurvey, revealed a number of things. Mostly it highlighted the fact that when our fevers rise we don’t get down.

Besides the 66.6 percent that won’t even consider sex with a case of the sniffles, over half of respondents said that they would rather get laid with a broken arm than with a severe cold or flu.

The biggest turnoff, according to the survey, is snot. More than a third of people questioned stated a runny nose would stop them from kissing their partner, beating out the three lovely alternatives of fever and sweating, coughing and sneezing.

Even things like genuine feelings couldn’t outdo the common cold. A heartbreaking 55.4 percent of people said they would not have sex with someone they “desired” if they had cold or flu symptoms.

So, bad news right before a major snow storm hits and Valentine’s Day. We’d suggest you stay warm and drink plenty of OJ before Friday if you don’t want your tissues to be used for more than just blowing your nose. 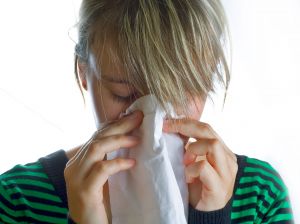