The store is called “Surprise! Surprise!” but many New Yorkers might have seen this coming.

The home goods store, which has operated at 91 Third Avenue for a quarter of a century, will close its doors for good, most likely at the end of April.

“We don’t know exactly when yet,” a cashier, who would only identify herself as Mina, told The Observer. “We’re still talking with the landlord and it might be sooner or later, but that’s all we know.”

Mina said the cause was a drop in business and subsequent increases in the rent.

The sound of various metal pots and pans falling to the ground punctuated our conversation, and we had a hard time getting the story straight — but Mina’s frantic and endearing confusion is characteristic of Surprise! Surprise!, a hodge-podge of cheap silverware and Christmas lights that is especially popular amongst NYU students and bargain hunters living nearby.

“I’m very upset,” she admitted to us. “Anyway, you want to buy something?”

The housewares store also has some more famous fans, like Norah Jones and Drew Barrymore, according to New York Magazine.

Surprise! Surprise! is the latest in a line of nearby low-cost businesses that have closed due to rising rents, including University Cafe, Fern Cliff Deli and Sigma Burger Pie (it’s possible that last one was also busted for serving alcohol to minors). So it’s probably no shock to residents of the area that the same fate could befall the little housewares store that (previously) could.

But the downfall of Surprise! Surprise! does bring one pleasant (ahem) surprise: All items will be discounted at 20 percent off from now until the store actually closes, whenever that is. So stock up now on mismatched silverware and Hobbit magnets, and say your goodbyes to a neighborhood gem. 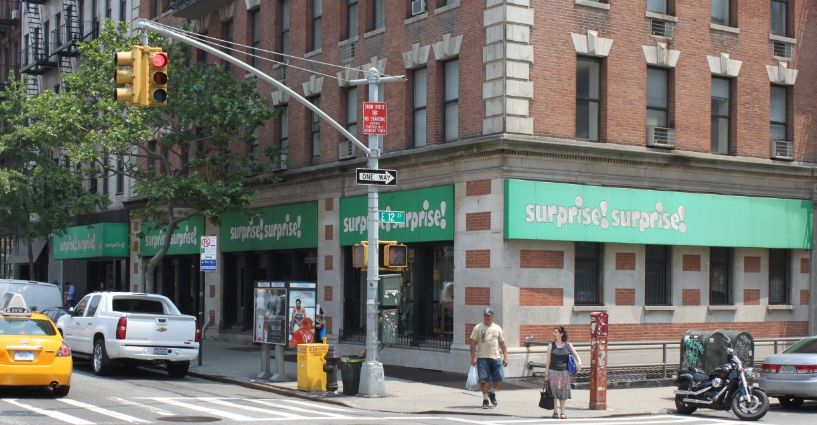