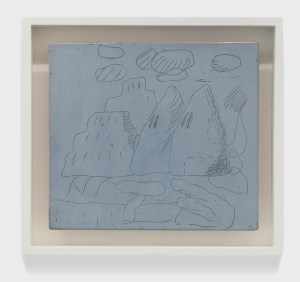 A snowman walks into a bar. He, his desperado hat and the swinging saloon doors are drawn in a fussy black line on a small piece of lined notepaper by Michael Williams. The size of the drawing—it’s only five-and-a-half inches high—gives it the supple ambiguity and potential of an infant: a black fingerprint in the upper-right corner is as big as the moon. Donald Baechler’s small painting Group, 10 smiley and frowny faces piled in a hill on a clay-colored ground, hangs right beside the snowman, as close as Eskimo sunglasses: a narrow aperture screens out blinding irrelevance.

The gap between Group and an untitled, gray-tone Brice Marden etching, however, creates a flashing, lenticular grill, fully blinding in its own right and forceful enough to drive the viewer on quickly to a 19th-century watercolor, on irregularly cut paper, of a leaping yellow horse. Its shape is as simple and universal as any teepee painting. Formal doubles continue from the horse to Myron Stout’s humped black graphite stripes, from the stripes to a gorgeous square engraving of black ocean waves by Vija Celmins and from the pointy waves to a crayon and pastel explosion of six-pointed stars by Tal R.

Another piece of 19th-century folk art stands for the peculiar appeal of the miniature: Interwoven into an elegant black paper hand, matted against blue at the very center of a thick golden frame, is a red paper heart. Suzan Frecon’s from the series ‘cathedral,’ a solemn watercolor on seriously rumpled paper, reaches across an untitled Philip Guston etching plate to rhyme with Don Joint’s St. Claire Rescuing the Shipwrecked, a loosely spiraling square of overlapping colors in handwoven cotton. Robert Gober’s Brokeback Mountain—not a real ticket stub but a perfect simulacrum—points across the room to the collector’s vitrine in which a bronze and emerald Bird by Kiki Smith, a bronze figurine by Elie Nadelman and Brice Brown’s sterling silver Cherry lie alongside an 18th-century miniature, surrounded by pearls, of some long-lost lover’s eye; on the wall beside it, John Wesley’s acrylic Untitled (Two Torsos) shows four bright pink breasts.