We found it! The wait is over (and it’s not Admiral Ackbar.) Spoilers about season two of House of Cards below!

You might remember our friend better as “Bird with helmet with voice of Jigsaw from Saw.” He’s the avatar of Gavin Orsay, the hacker who helps out/totally fucks over Lucas Goodwin on his deep web search for a connection between Zoe Barnes and Frank Underwood. He first appears to Lucas on an iPad delivered to him in a diner. But what the hell IS it? Some 4Chan/Reddit in-joke? Is it Anonymous-related? Does it have anything to do with hackers at all?

Turns out, it’s based on art. The little guy is on the right panel of Hieronymus Bosch’s triptych, The Garden of Earthly Delights. Here he is in a Creepy Pasta Wiki. The implications of that bird in this context might be even scarier than when we thought it was a Deep Web thing: Despite the title, this guy is just one player in a larger band in hell. (Update: Apparently that is the Prince of Hell, and it’s a cauldron on his head.) What does that say about Orsay or his role this season? To say nothing of Cashew!

Oddly, Helmet Bird is not the only part of that totally trippy, over 500-years-old picture that is getting play this week. Or the first original series for a streaming content provider to make an allusion to him. 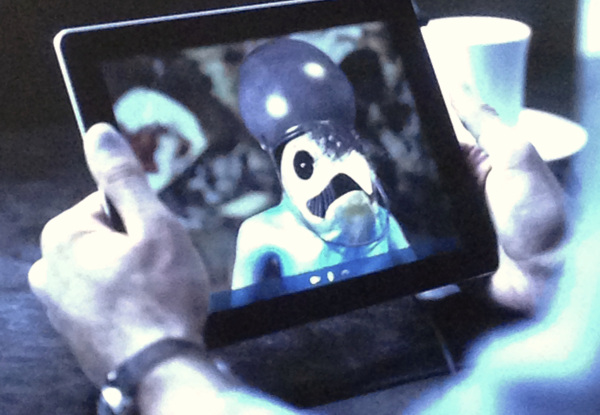