A tale of identical twins so laconic it practically dozes off right in front of you, The Pretty One is a debut feature by writer-director Jenée LaMarque. She has a lot to learn. Experience might help.

Zoe Kazan, whose chief claim to professional status is that she is the granddaughter of genius director Elia Kazan, is a bright-eyed young actress learning on the job, with a checkered filmography of a few good roles (Meryl Streep’s daughter in It’s Complicated) and a few real stinkers (Ruby Sparks, which she also wrote). In The Pretty One, the newest entry in her portfolio, she gets the dual chore of playing sisters. Laurel is plain as a mason jar. She dresses like a Poor Pitiful Pearl Doll and is so repressed and pathetic that the guy who takes her virginity is the boy she babysits when his parents are out of town, which makes no sense, since he’s 18 years old. Audrey is “the pretty one”—she left home and became a career girl in San Francisco, with a sense of style, better hair and a hunk magnet. She was named after Audrey Hepburn. Get it?

After a head-on collision, the pretty one dies, and Laurel wakes up in the hospital ready to take over her sister’s identity. After delivering a tearful eulogy at her own funeral, she leaves the hick town where she has wasted her life taking care of her eccentric father and his vulgar, loudmouth mistress and moves into Audrey’s shoes in the big city. It’s nice to wear a new wardrobe for awhile, but in no time, Laurel learns the grass is not always greener in somebody else’s yard. She’s a disaster at Audrey’s real estate office, and who knew there were so many old boyfriends? This includes a married guy (Ron Livingston), whom Audrey was forcing to leave his wife, who turns out to be Laurel’s new boss. With her arm still in a sling from the car crash and a big black scar across her face, Laurel joins a support group for twins whose twins have died, posing as Audrey. Then Audrey’s enemy, the tenant next door (Jake Johnson, from TV’s New Girl) who hated her, falls for Laurel, thinking Audrey has changed. When the truth is finally revealed, everyone resents the fact that they’ve been mourning for the wrong person. Nothing more to do, I guess, except to have a second funeral.

The gimmick of one twin pretending to be the other twin used to work when Bette Davis did it, lighting her own cigarettes and hugging herself on a split screen, first in A Stolen Life (1946), then in Dead Ringer (1964). But the good twin/bad twin conceit in 2014 doesn’t have a shred of the original surprise, and Zoe Kazan doesn’t have the chops to carry it off anyway. Instead of the usual miserable rock tune you get these days, a lovely theme song, “It Might Be You,” with lyrics by Marilyn and Alan Bergman and music by jazz great Dave Grusin, graces the end credits. Otherwise, nothing about The Pretty One is anywhere near as much fun as a double dose of Ms. Davis. 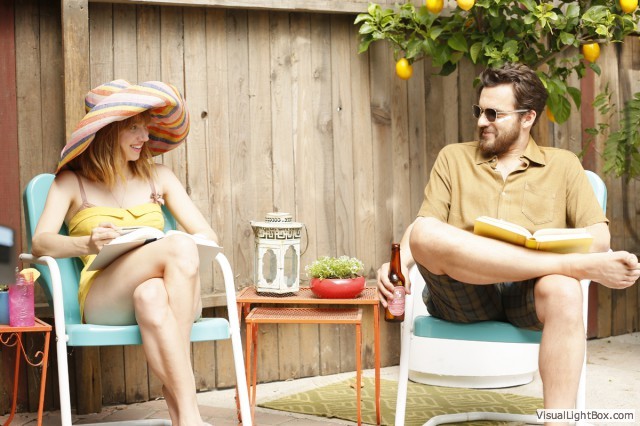