Lets just say if New Yorkers ever rode into battle, they would do it without wearing any armor.

A whopping 68.2 percent of residents polled said they did not wear a condom the last time they had sex, according to some numbers just released by the Department of Health’s Community Health Survey for 2012. That correlates to 1,408,000 people using protection as opposed to 2,669,000 that prefer to just cross their fingers.

That is not even the worst number. The survey broke down the barebacked activity, and Greenpoint is having so much unprotected sex one would think it is the latest health craze being sold at Whole Foods. A surprising 85.8 percent of the Brooklyn neighborhood prefers to have sex sans condom (not even the shiny new XL ones).

But lets not be too quick to point the finger solely at Greenpoint. It is interesting to note that not one New York neighborhood leaned towards the pro-prophylactic side of the equation. Ridgewood and Forest Hills reported that 79.9 percent of its residents prefer the unprotected road, with the Upper West Side right behind them at 77.4 percent.

In Coney Island, 75.2 percent of people are riding the Cyclone wooden coaster without a safety harness. So to speak.

But why is such a large majority of the Big Apple shunning condoms during their most intimate moments? Maybe they are trying to savor the feeling while it lasts. According to Nerve, the average New York sex session lasts about three minutes and one second.

Which, while we are having this personal discussion, puts us just two seconds behind Wyoming in a national ranking. It is a game of inches, people. 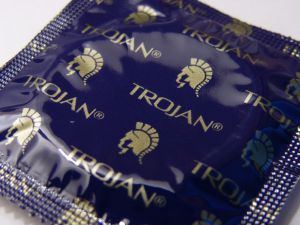