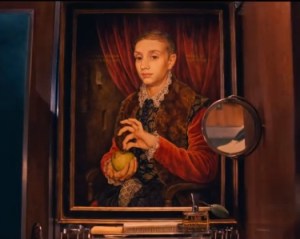 Don’t want to give anything away here so I’ll keep it vague, but a painting plays a major role in the Wes Anderson’s new film, The Grand Budapest Hotel. Titled Boy With Apple, it’s a luscious, handsome Old Master number, attributed in the movie to a fictional Johannes Van Hoytl the Younger, that shows a young boy holding a green apple. Over in The Wall Street Journal, Howie Kahn asked Mr. Anderson about the painting, and he explained what inspired the work:

“Our reference was kind of Flemish painters. And Hans Holbein; I don’t know if it’s the younger or the elder. I like Brueghel, and another one that’s maybe connected to this is a Bronzino at the Frick. We were trying to suggest that it wasn’t an Italian Renaissance painting. That it was more northern.” 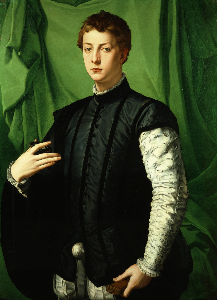 Mr. Anderson is almost certainly referring to the Frick’s portrait of the aristocrat Lodovico Capponi, which the Florentine artist painted around 1550–55. The Frick’s website notes that Bronzino had Capponi position his hand so that it partially obscured an inscription on a cameo he holds so that only the word sorte (fate) can be seen on it, which is rather perfect given the part that the Van Hoytl it inspired plays in the movie.

In any sense, The Grand Budapest Hotel is fantastic, well worth a trip to your local movie theater. An Egon Schiele also makes an appearance, so there’s a lot to look forward to.