There isn’t much Joan Didion is under-appreciated for, except maybe this: Nobody has made a greater contribution to the canon of the author photo.

Consider the recent photography exhibition of writers and editors marking the 50th anniversary of The New York Review of Books. Didion—famous for a half century herself—understood the value of taking portraits early and often.

Throughout the decades, there are iconic images of her sprawling in armchairs, gazing from her sports car or nursing a cigarette. She exudes literary glamour, even as a journalist in her 20s.

As one book agent told me, “it’s like she never stepped out of the house without running into Irving Penn.”

These quiet, soulful pictures—there are scores of them on the internet—have a remarkable power to enthrall. Being so accessible online, they connect the author to many young readers just discovering her work.

“There’s also just the way she looks,” wrote one admiring blogger. “The long flowing dresses, the sandals, the ever-present cigarette, the cocktail in hand, the wry smile or scowl, the languid West Coast affect, her white Stingray. All these things drive me crazy.”

That stylish car, a 1969 Corvette Stingray, features in a series of striking photographs taken in 1970 by Julian Wasser for Time Life Pictures.

Michiko Kakutani, who visited her for a 1979 New York Times profile, notes that the car was actually yellow. But as Didion’s image becomes formed for a new generation by the black-and-white record of her life, the details become bleached until they conform to the photographs.

The publication has long been criticized for its limited roster of approved authors and critics. It has been charged with excluding women, and last month Russell Jacoby used The Chronicle of Higher Education to call out “its insularity, Anglophilism, devotion to New York-based writers, and love affair with Ivy League-chaired professors.”

As a NYRB reader of 15 years, I have noticed a correlation between positive reviews and those accompanied by a 1980s-era portrait of the author by its house photographer, Dominique Nabokov. That dated, black-and-white rectangle seems to be the closest thing the publication has to a gold star.

So it was in the current issue, in an approving review by Francine Prose of Diane Johnson’s Flyover Lives: A Memoir.

Under a 1987 portrait by Nabokov, the caption notes: “More than fifty of Nabokov’s photographs of writers, editors and others are collected in Dominique Nabokov: The World of The New York Review of Books, the catalog of a recent exhibition at NYU’s Maison Francaise.”

The catalog is available for free online.

It comes with introduction by Ian Buruma, who acknowledges, “there is something a little bit clubby about the ‘Review.’” (The photographer, after all, acquired her last name by marrying the composer cousin of Vladimir Nabokov. The author and his set feature in her early work.)

As Didion portraits go, it’s almost candid. She is neither hiding behind saucer-sized sunglasses, nor holding her cigarette like a short knife.

And something about the situation of her right arm (stubbing out that cigarette, perhaps?) almost suggests movement, the very antithesis of the eerily still portraits by which we have come to know her.

James Wolcott had an amusing anecdote in his memoir of 1970s New York literati, Lucking Out, about the dislike between Didion and her erstwhile Berkeley classmate, the film critic Pauline Kael. As it happens, Wolcott’s latest collection, Critical Mass: Four Decades of Essays, Reviews, Hand Grenades, and Hurrahs, is also reviewed in the current NYRB.

But unlike Diane Johnson’s page, there is no house-approved, vintage black-and-white Nabokov portrait for him.

The picture is in affronting color. It looks a bit like a Hans Holbein the Younger portrait of Beau Bridges. 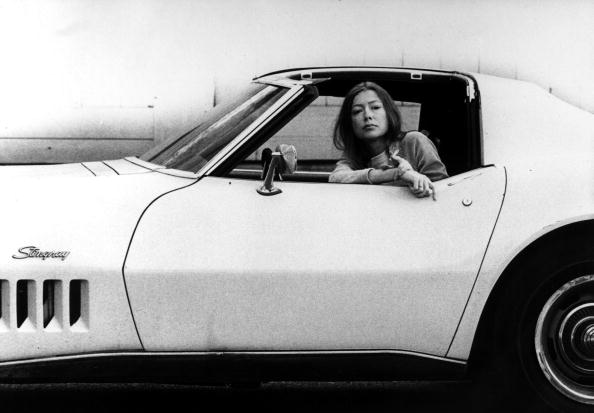