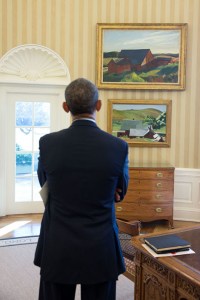 The Whitney Museum has loaned Edward Hopper’s Burly Cobb’s House, South Truro and Cobb’s Barns, South Truro to the White House, both of which were installed in the Oval Office last week. Get a load of the picture to the left of President Obama admiring the works.

In a statement, the Whitney’s director, Adam D. Weinberg, said, “Edward Hopper’s history with the Whitney goes back to our roots in 1920, when he was given his first one-person exhibition at the Whitney Studio Club, forerunner to the Whitney Museum. Since the founding of the Museum in 1930, we have exhibited Hopper’s work more than any other artist and are proud to house the greatest collection of Hoppers in the world. We hope these beautiful Cape Cod landscapes will give great pleasure to President Obama and to all who see them.”