Ever since Kurt Vonnegut slandered semicolons (“They are transvestite hermaphrodites,” he said, “representing absolutely nothing”), aspiring writers have looked upon them with a mixture of confusion and trepidation.

But there is a breed of writer who thrives on the semicolon’s ability to connect disparate ideas, stray thoughts and loose ends, as the novelist Claire Messud points out in a lovely little paean to the punctuation mark in the latest issue of Intelligent Life magazine.

“For those of us,” Ms. Messud writes, “whose thoughts digress; for whom unexpected juxtapositions are exhilarating rather than tiresome; who aim, if always inadequately, to convey life’s experience in some semblance of its complexity—for such writers, the semi-colon is invaluable.”

Ms. Messud is talking about literary writing, of course, but I’d argue that the semicolon is also perfectly suitable for text messaging, instant messaging and online correspondence via Facebook and other social networks, where disparate ideas roam free and “unexpected juxtapositions” are the norm.

I feel compelled to say this because I often use semicolons in digital communication and have encountered some unexpected pushback.

“Is there any form of communication informal enough for you to abandon semicolons?” a friend of mine wrote to me two years ago, when I’d used two semicolons in a 61-word Facebook message. “Texting? Morse code? Semaphores?”

Wired magazine has said that using semicolons in text messages is, basically, a socially lame and pretentious thing to do. “No one uses semicolons in day-to-day casual writing; it’s a literary piece of punctuation, not a colloquial one,” the magazine noted. “So using a semicolon in a text shows you’ve thought out, revised, and overedited your message. That means you’re trying too hard, and there’s nothing worse than trying too hard.”

But I disagree with all that. I rarely revise my text messages, sending out typos and odd autocorrections left and right, and the semicolon is often the first punctuation mark I thumb for when I’m moving onto another thought (for instance: “yea, dinner at 8 sounds good; did you walk the dog?”).

A period could very well have worked there, but as Ben Crair observes in the New Republic, they often seem too severe; and exclamation points, the kudzu of punctuation in the digital age, might make you feel like an overenthusiastic phony. But the semicolon’s breezy informality, for me, captures the unstructured, colloquial nature of digital correspondence more so than any other punctuation mark out there.

And so, at a time when semicolons may very well be “endangered,” as the inaugural issue of Apology magazine put it last year, there is all the more reason for us to put this noble mark into wider use. The semicolon at least deserves a place in our texts and other digital messages beyond the winky-face emoticon. 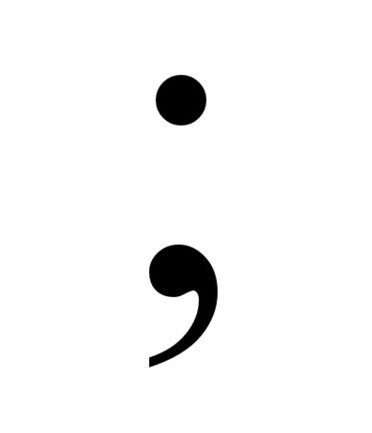