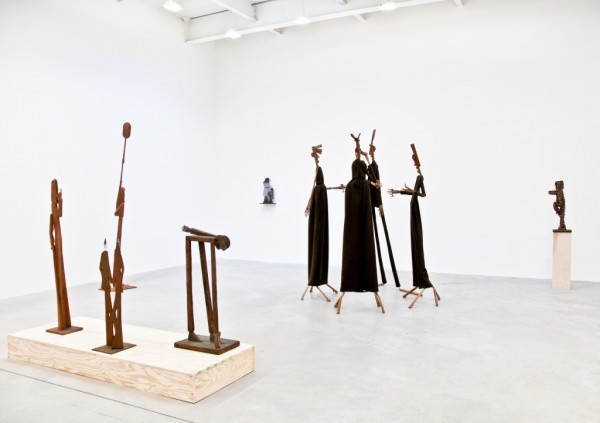 Straight out of left field comes artist William King, with rail-thin, high-legged stick figures in natty suits, miniature ceramic portrait busts and the odd figurative drawing, all sporting outsize personalities and perhaps an orange wig or cocktail glass. At age 88, Mr. King is a longtime New Yorker now based in East Hampton and a Cooper Union graduate (where he overlapped with people like Alex Katz and Lois Dodd), whose work displays the comic energy of Franz Xaver Messerschmidt’s heads and Honoré Daumier’s busts of political figures, the manic good-naturedness of Bill Traylor’s gesticulating figures and the serene presentness of sculptures by Elie Nadelman, whose work Mr. King saw as a young man. Mr. King’s figures carouse, goof off, strut their stuff. They appear to be expert raconteurs who want to sit you down for a chat.

Though having little to do with mainstream art currents of the past half-century (Minimalism, Pop and so forth), Mr. King’s art, reared on folk, provides essential links to today’s band of adventurous figurative artists, like Matthew Monahan and Aaron Curry. It serves as a salient reminder that art history is not a clean, linear narrative. There are mountains of rich, illuminating work out there right now, being made or waiting to be rediscovered and recontextualized, picked up when the time is right. For Mr. King, that time is right now.