When Mayor Wayne Smith seeks re-election in Irvington on May 13th, he will face the voters without the team of local core power players that helped sustain him in politics for two decades.

In 2010, when Mayor Smith had the support of Beasley and Sowell and Team Irvington, he garnered 48% of the vote.

The fact that Beasley doubles as a freeholder with close ties to the Essex County Democratic Organization and power County Executive Joe DiVincenzo has others concluding that Smith is doomed.

Beasley insists he bears no ill will.

“What opened my eyes when was when Wayne ran for congress and he couldn’t get support in his own town,” said Beasley.

“The tax increase in town still resonates and the general view here is it’s time to give someone else a chance,” Beasley said. “You can be who’s who in America and not minding your own backyard. As people aspire, sometimes it can get away. I think that’s what happened to Wayne.

With Beasley on his side, Vauss has a big organizational leg up on the other challengers but a crowded field – veteran Councilman David Lyons (19.5% in his 2010 mayoral bid) picked up petitions last week, and Newark Detective Gene Etchison is again running (21.26% in 2010) – has insiders unwilling to count out the well known incumbent mayor.

“Smith is trying to make the county the bogey man, saying ‘they’re coming over here, but the support base for Tony has been not just Essex County but those who have come to know Vauss as a leader,” Beasley said. “The county’s support for Wayne wasn’t a problem before. It’s only a problem when the local dynamics change.”

An insider speaking on condition of anonymity insisted Smith’s problem has less to do with falling out of favor with anyone in the county party organization than just longevity.

“The situation is comparable to Mayor Bowser [of Irvington, defeated last year] to the extent that you’re comparing longtime incumbency, which in this environment becomes less tolerable for many people,” the source said. 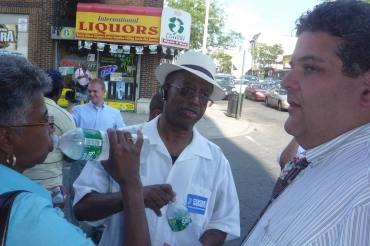