NEWARK – When education reformer Derrell Bradford, the moderator of Wednesday’s Newark mayoral candidate forum on education issues, began the evening, he set a basic rule. When the four-minute speaking intervals for each candidate were finished, he would ring the bell, and civility would hopefully reign.

But in front of 500 people at a Rutgers-Newark auditorium, it appears that when Bradford rang the bell, the two remaining candidates, South Ward Councilman Ras Baraka and former Assistant Attorney General Shavar Jeffries, heard something else. Before a revved-up crowd, the two candidates disregarded the dings and kept striking rhetorical blows, marking the first round in the final stretch of the Newark mayoral campaign.

Baraka and Jeffries ran the policy gauntlet about education on the day when both North Ward Councilman Anibal Ramos, Jr. and Central Ward Councilman Darrin Sharif dropped out of the race, therefore crystallizing the competition.

A critical component of the education policy debate is the proposed One Newark school reorganization plan backed by Newark School Superintendent Cami Anderson. Anderson was appointed by Gov. Chris Christie in 2011 to run Newark’s state-run school system, the largest in New Jersey. The governor publicly stated in September 2013 that he plans to reappoint her, and that he did not care about community criticism.

The criticism reached a crescendo when Anderson announced the One Newark plan in December, which includes the expansion of charter schools, which already serve approximately 20 percent of the city’s students, as well as the closure or consolidation of more than a dozen public schools.

With politics bleeding into Newark’s educational issues, Baraka threw a punch at those behind the One Newark plan.

“Leadership has to have to the courage to go in the room with people who disagree with what you say. That’s what democracy is about, and if we are fighting for education, then we are fighting for democracy,” Baraka, who is on leave from his job as a Newark public high school principal, said. “We need to have a superintendent who is willing to do that.”

“We can’t have a small number of people in Trenton decide what is best for our children, and when and if they will engage our community,” said Jeffries, a former Newark school board member. “People have to decide what ethos they want in the people they represent. That’s one of the things we have to decide tonight.

“There is too much in the One Newark plan at once. You can’t identify what works,” Jeffries continued. “There are some good things in the plan, but we can’t be closing eight to twelve schools all at the same time. The superintendent needs to do better. If not, we have to get a new superintendent.”

Jeffries added that the relationship between Newark’s public educational leadership should be similar to “a good marriage.”

In their closing statements, Baraka and Jeffries focused on the future of Newark’s public education system.

“I don’t believe in this or that,” Baraka said. “All of us have to be a part of the transformation of this community. We collectively are going to transform the schools. We’ve had enough of drive-by mayors. We’ve had eight years of nothing. People in this city were not included in what was going on. My job is to win you over and get you to be a part of a movement. Our parents want Weequahic High School, and they want Science High School. They want it all.”

“That was a beautiful speech, but people don’t need another speech. They need better results to change the quality of their lives,” Jeffries replied. “This city is really at a crossroads. We don’t need leaders delivering poems about results, but leaders who produce results. We are in a crisis. We don’t need more talk.”

Although Bradford’s bell-ringing went unheeded, several audience members told him that they felt Wednesday night’s mayoral candidate forum about education was the most civil to date.

“There were some great and important things said about charter schools, about district schools, and about the fact that every candidate understands that what we have right now is unacceptable,” Bradford said. “That’s a huge leap forward.”

At the end of the first day of the emergence of a two-man mayoral race, both candidates assessed where they stood after they fought the first mano-a-mano round.

“We won. We focused on substance, records and results, and we’re very confident that’s what’s going to resonate with the people in the election,” Jeffries said.

“I’m not the referee,” Baraka said. 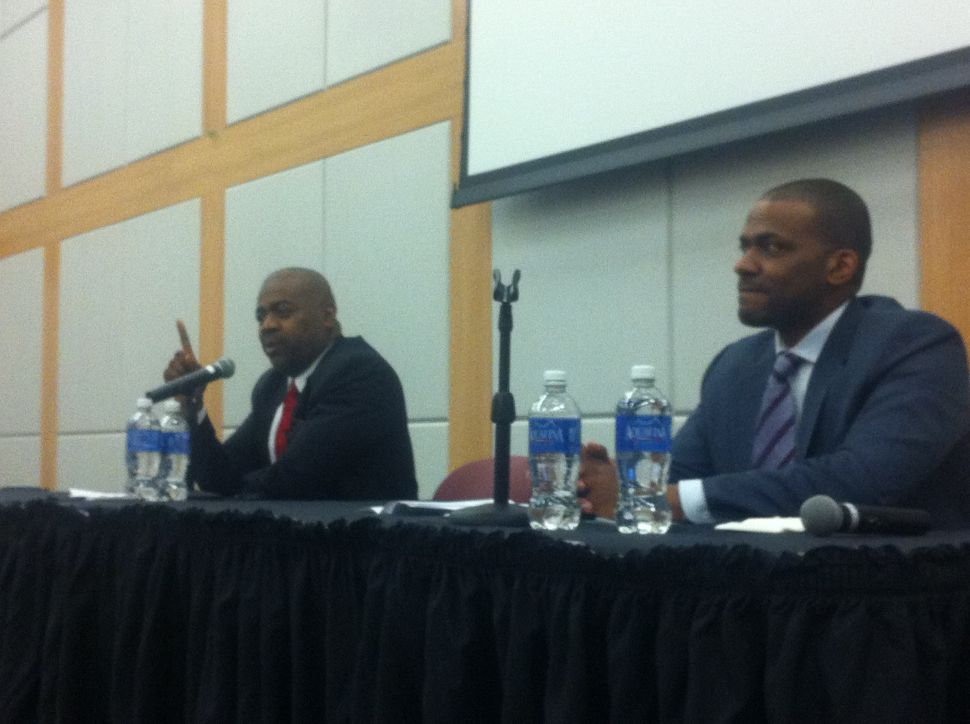