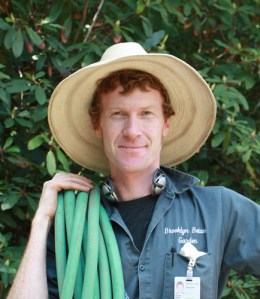 Just in time for spring, the Metropolitan Museum of Art has named a new managing horticulturalist for pretty much the most beautiful place in all of Manhattan, and maybe the entire city, The Cloisters. The lucky man is Caleb Leech, who comes from the Brooklyn Botanic Garden, where he has worked since 2004. He’ll take the place of Deirdre Larkin, who stepped down in December.

Mr. Leech “was raised on working farms in New England, and has been gardening from an early age,” according to the museum’s news release, which also has some fascinating details about the gardens at The Cloisters, which I will now quote at length:

Each of the three outdoor gardens at The Cloisters features a design and plantings based on information found in documents and works of art from the Middle Ages. One of the most specialized plant collections in the world, the Bonnefont Herb Garden includes veteran quince and espaliered pear trees (the eldest of which was planted in 1940) as well as plants known and used in the Middle Ages. The Cuxa Cloister garden features unique pollarded crab apple trees and ornamental borders, combining both medieval species and modern plants. And the Trie Cloister garden, currently under renovation, has traditionally been planted to evoke the flowering meadow so often depicted in medieval works of art. The gardens were originally laid out and planted in 1938, the year The Cloisters opened.

Announcing the hire, C. Griffith Mann, the curator in charge of medieval art and The Cloisters, said in a statement, “Caleb’s extensive horticultural background combines research and interpretation of a historic garden with the hands-on experience required to keep the grounds thriving.”