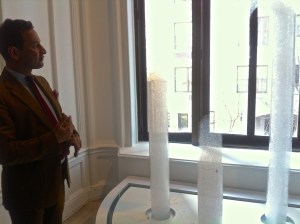 “Art history’s really depressing,” said Jewish Museum Deputy Director Jens Hoffmann, “because you look back to all these wonderful, very radical art movements that happened and you always feel, ‘Why am I in this moment, and not in Dada or whatever.’” While his new exhibition at the museum may induce nostalgia, “Other Primary Structures” is far from depressing. It’s a tight presentation of Minimalist sculpture from around the globe with more than a few playful works, like wiggling pillars of foam by Filipino artist David Medalla and small aluminum sculptures by Brazilian artist Lygia Clark that viewers are invited to touch and rearrange. 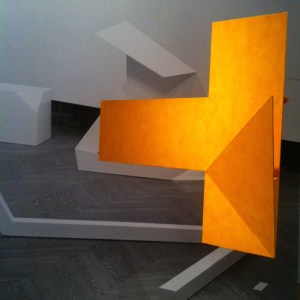 “Other Primary Structures” harkens back to “Primary Structures: Younger American and British Sculptors,” a 1966 exhibition at the museum organized by curator Kynaston McShine that effectively introduced audiences to Minimalist sculpture through then little known artists including Sol LeWitt, Carl Andre and Donald Judd.

“It was just something that we needed to do, like deal with our own history and look at the other great things that this place has done,” said Mr. Hoffmann, who has a track record of staging shows about other shows. It was time, he felt, to revisit the exhibition, but with an eye toward other parts of the world, from Latin America to the Far East. About 80 percent of the works on view have never before been exhibited in the States. Others were constructed for the first time for the exhibition, including Argentinan artist Noemí Escandell’s monumental X-shaped sculpture, which the museum fabricated using a drawing she made in 1967. 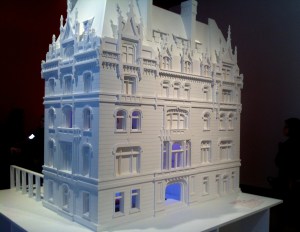 A model of the Jewish Museum containing ‘Primary Structures’ in miniature.

“Kynaston, when he made the show, he had the entire building,” said Mr. Hoffman, “and we have one floor, so that’s not necessarily a challenge, but it’s a big difference.” We were talking in the final room of the exhibition, and he was gesturing toward an elaborate scale model of the museum with the original “Primary Structures” show installed inside. Peeking in the windows of the museum-as-dollhouse, you can spot miniature Richard Artschwagers and Walter De Marias. Mr. Hoffmann, who was wearing a brown corduroy suit with a red pocket square and blunt end knitted tie, said his solution to the space constraint was to present the exhibition in two parts, with the first, devoted to work made between 1960 and 1967, opening March 14, and the second, focusing on the years 1967 through 1970, opening May 25.

“I think that this period of the mid-to-late-1960s was a very inspiring, very radical moment not only in politics but also in art,” said Mr. Hoffmann, “and I think that’s why we now look back at this.”