Terrence McNally has so many reasons to celebrate his 50th anniversary as one of the greatest contemporary playwrights the theater world has yet produced that it seems almost dopey to applaud only one. Let’s just say I can think of no better reason to raise a glass or light a candle in his honor than the triumphant, aptly titled new play Mothers and Sons, his 20th Broadway production. In 90 minutes without intermission (my kind of show!), it nourishes the soul with wisdom, informs the mind with knowledge and lifts the heart into a deeply moving state of gratitude. It is profound, enriching and heartbreaking. When it ends and you walk out dazed, you know you’ve been to the theater.

Mothers and Sons is about many things, but I believe it is mainly about the panic of people challenged by a world changing faster than they can keep up with and the consequences to be faced by the ones who take too long to catch up. For Katharine Gerard (magnificently played by Tyne Daly), trying to collate the remnants of change too late proves emotionally wrenching to the point of near fatality. Katharine is a brittle widow from Dallas who survived a husband she didn’t love and outlived a son she loved too much but didn’t understand. Her son, Andre, left home at 18, moved to New York to be an actor and died of AIDS. She met his lover, Cal, only once, at a memorial service she has all but obliterated from the detritus in her mind. That was 20 years ago. Now, on a cold winter day before Christmas, she looks up his address and arrives at his apartment overlooking Central Park—unplanned, unannounced, unexpected—for what? To see what he looks like? To find out if he has held on to any remnants of the past or proof of her son’s existence? To ease her conscience and settle some unfinished business?

What she finds is a happy, well-adjusted man (played with a bracing absence of gay neuroses) who has made peace with the past and lived for the last decade with a much younger man named Will he boldly calls his husband (Bobby Steggert) and their adorable, lively and unabashedly honest 6-year-old son, Bud (Grayson Taylor, a moppet with finesse). What follows is a play of ideas, laced with sagacity, warmth, humor and passion. Mrs. Gerard is a misplaced conservative from Westchester, transported to Texas through no will of her own, who cannot compute what she is about to learn from the first same-sex married couple in theater history. As the play unravels, so does this steel magnolia with talons of marble. Mr. McNally soothes her pain by hiding it behind hilarious armor that comes in the form of lines you’ll be quoting for years. But the laughs are framed in heartbreak.

As the history of these people evolves through revelation, confession and conversation, with the aid of honesty and scotch, every point of view is expressed candidly until you feel like you get to know the people in Mothers and Sons as friends, not characters in a play. Ninety minutes is long enough to get to know someone when presented by a skilled writer with an understanding heart. Mrs. Gerard brings her rage and confusion to the party, while Cal shares memorabilia—photos, postcards, Andre’s personal, unread diary—and Will counters with the impatience borne of a younger, more liberated mind-set. How do you make a child understand why two dads are acceptable today but not in times gone by? What alchemy can you use to make a straight, confused older woman understand AIDS? She’s a volley of masks, hiding her inner loneliness, but one of the play’s greatest strengths is her refusal to say, “I’m a nice person; you just misunderstand me.” She’s an unapologetic bitch, harboring anxiety but making no excuses for her corrosive rudeness. She’s lost, furious and out of touch with progress. How, Mr. McNally asks, do you compute the facts of an individual life when everything changes and there’s no time to hold on to what values used to mean? “Husband” means something new. Even the word “happiness” has alterative definitions.

There is nothing worse, I am told, than a parent who outlives her own child. Mrs. Gerard is hard, coarsened by life—the kind of calloused dragon Ms. Daly plays to perfection. Sheryl Kaller’s direction is fluid, John Lee Beatty’s set is the embodiment of the kind of comfortable, architecturally perfect home where two successful gay men would definitely live, and the four cast members work with the seamless and balanced ensemble work of a string quartet. But it is Ms. Daly who melts the heart. When her implacable body language shifts as she reaches at last for a hug or when she realizes that nothing, in the eyes of a child, is so tragic it can’t be solved by milk and Oreos, the audience around me sobbed, and so will you.

I’ve seen plays about death, loss, resignation, regret, courage, hope and despair. But it is as rare as a truce of peace at the end of a war to experience them all at one time in the same play. Mothers and Sons is a masterpiece. 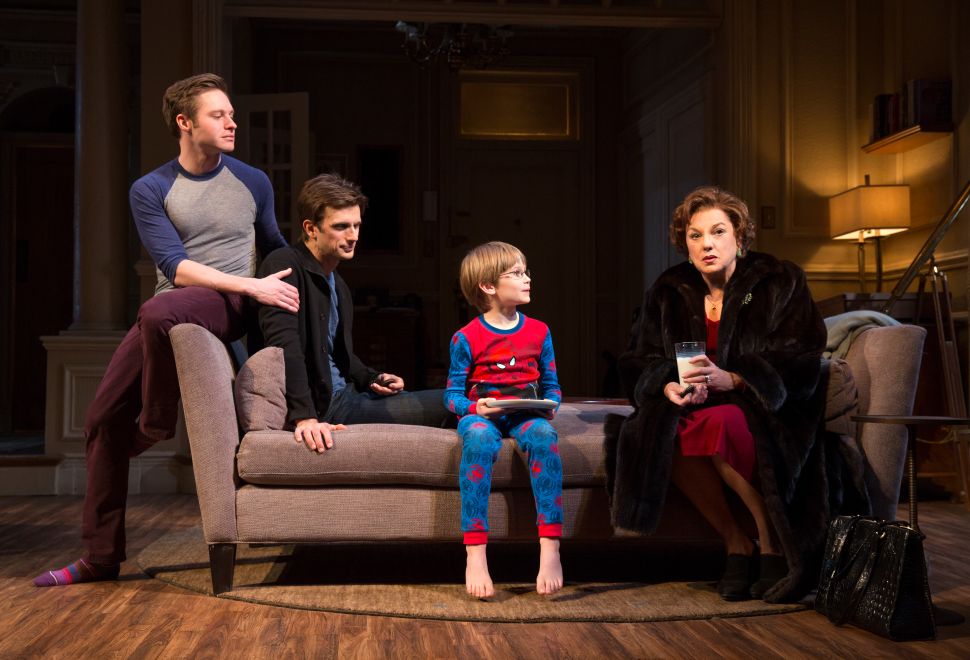