In 2011, at Sotheby’s, L’Aubade, a 1967 painting by Pablo Picasso sold for $23 million. In recent years, Picasso’s late works have taken center stage, with giddy results at auction and thronged exhibitions at Gagosian Gallery. It wasn’t always thus. The late works were undervalued for years by all but a perspicacious few. One of those few was the Greek-born art dealer Alexander Iolas, whose career is now the subject of an exhibition at Paul Kasmin gallery, in Chelsea.

Iolas “had a thing for Late Picassos,” the exhibition’s co-organizer, the Paris-based British art writer and curator, Adrian Dannatt (who has written for this newspaper) said in a telephone interview. “He wasn’t his dealer but he bought and traded a lot of Picassos. And he did get things directly from Picasso.” Mr. Dannatt tells the story of a visit Iolas made to Picasso’s studio in the 1950s. “Iolas pretends he has to get his cigarette lighter …. ‘Hold on … I need my cigarette lighter!’ He flips open his briefcase and it is just a whole suitcase of banknotes. And Picasso says ‘Okay, okay, okay! Alright! Choose something!’ So he chose something. And Picasso counted every note.”

Iolas sold late Picassos to avid collectors like Pauline Karpidas. “Picasso loved him,” Mr. Dannatt said. “He was one of the people who really believed in late Picasso when they were totally despised.”

Outside of exhibitions like the one at the Museum of Modern Art earlier this year devoted to the great dealer/collector Illeana Sonnabend, or  that at the Met in 2006 built around the lore-encrusted Ambrose Vollard, shows with art dealers as their subjects have been few. The idea of doing one about Iolas came to Mr. Dannatt at the Thessaloniki Biennale of Contemporary Art in 2011. He had been tossing around ideas for a project with Paul Kasmin, the New York gallerist. As he toured the sprawling donation that Iolas had made to the Macedonia Museum, it occurred to him that although Iolas’s imprint on art history was significant, his name had faded from memory. With art dealers and their relationships with artists very much in the spotlight in the world of contemporary art, it seemed like the right time to bring him back.

Iolas was born in born Constantine Koutsoudis in Alexandria, but nobody knows precisely when. “He changed the date of birth in his passports continually,” said Mr. Dannatt. “He was probably really born in the 1890s. Or 1900. And he changed it to 1907.” (Iolas’s archives, Mr. Dannatt added, are “complete chaos.”)

Iolas went to Berlin as a pianist, and took off for Paris when the Nazis came to power. In Paris, he became a ballet dancer, joining the Marquis de Cuevas’s company. He was soon a recognizable figure in a landscape that featured Picasso and Jean Cocteau, Rene Magritte and Max Ernst. He did well enough as a dancer to go on tours of Europe and both North and South America, but an injury in the early ’40s—and, one assumes, his advancing years—put paid to that.  A portrait of Iolas as a young dancer by de Chirico features in the show at Kasmin.

His years as a dancer developed his eye for art. He made a seamless transition into a second career as director of the Hugo Gallery on New York’s Upper East Side. The Hugo Gallery had been opened in 1944 by Robert Rothschild, Elisabeth Arden and Princess Maria Ruspoli, who had been married to a French grandee, the Duc de Gramont, and who was then married to a grandson of Victor Hugo, from whom the gallery got its name. That’s how the art world was, pre-professionalism. It was not terra incognita to Iolas. “He saw a de Chirico in a gallery window when he was 17, 18,” Mr. Dannatt said. “That was a moment which he always said saved his life. He plucked up his courage in the end and bought it.”

The critical afterlife of dealers is dependent on just which artists they supported and the artists Iolas supported included stars who have waxed and those who have waned, like such Neo-Romantics as Pavel Tchelitchew, whose Hide And Seek was once the most popular image in MoMA, but who now barely has footnote status.

At the beginning of his art-dealing career, Iolas was best known for working with Surrealists like Magritte and Ernst—but their less popular later work. Indeed one thing that seems truly Old Europe about Iolas was his affection for artists’ well ripened work.  “That stuff was so unfashionable,” Mr. Dannatt said, “especially with the institutions and the museums when he was peddling it.” Surrealism may be wildly popular with collectors now, but in the middle of the last century it was a tough sell. “There was nothing that was more démodé than Surrealist painting.”

But Iolas was  eclectic in the art he handled. “I had always thought of him as a great Surrealist dealer,” said Mr. Dannatt. “And Warhol. But then he had Arte Povera. You suddenly realize he had people like Paul Thek, [Pino] Pascali, [Jannis] Kounnellis – people you don’t see as being part of this story. And Joseph Beuys who he didn’t actually work with, but who he was obsessed by.”

It was only a matter of time before Iolas outgrew the Hugo Gallery. In 1955 he teamed up with former dancer Brooks Jackson to found the Jackson-Iolas Gallery in New York. But before he left, the Hugo gave Andy Warhol his first gallery show, “Fifteen Drawings Based on the Writings of Truman Capote,” in 1952. And the two became close. “Homosexuality was illegal,” said Vincent Fremont, a onetime assistant at the Factory who helped organize the Iolas exhibition at Kasmin. “Iolas had been a ballet dancer.  Andy was very interested in that. There were all those links.”

Iolas’s relationship with Warhol was an important, and long-lasting one. When the two met, Warhol was still a commercial artist.  “Andy was trying to get shows in galleries,” Mr. Fremont said. “He was creating fine art but he was also very successful as a commercial artist. Rauschenberg and Jasper Johns, they all did it. But Andy was the only one that used his real name.”

Mr. Fremont remembers Iolas as a colorful presence.  “He had this great personality. That was infectious. He sort of took over the room, even though he was quite small. He always wore shoes with like Cuban heels to give him extra height. And he always wore these furs. He had conservative suits but then he would go off and wear more crazy things. One of the signature things was a fur cape. He wore a lot of jewelry. The more I think about it he really was showtime. And that’s how he got the attention of collectors. He was more European-oriented. He was cosmopolitan.” Foreshadowing today’s megagalleries, which open branches around the world, Iolas wasn’t content to have just the one space, in New York. He went on to open galleries in Paris, Milan, and elsewhere.

European-oriented and cosmopolitan were adjectives that equally applied to the leading dealer of the time, Leo Castelli, who was Warhol’s representative. But, Mr. Fremont said, there was a disconnect between Castelli and Warhol. “Leo didn’t really understand Andy all that much. He was Andy’s gallery but Leo was really looking towards Roy [Lichtenstein] and Robert [Rauschenberg].”

Iolas could be devoted to artists to a fault. He’d promised the Surrealist Max Ernst that he would close all of his galleries, save for the New York one, after Ernst died, and in 1976 that is apparently precisely what he did. Nevertheless, he went on doing business with the same drive. It was the late Fred Hughes, another of Andy’s dapper lieutenants, who connected Iolas with the de Menils, prodigious collectors in Houston. “I didn’t do a lot of business with him,” Mr. Fremont said. “Fred did. But then later in the early 80s, Iolas would call Fred and do a whole order. And then Iolas would call me. I took notes. Very important!” Why?  “Because he had a lot of action going.”

Towards the end of Warhol’s life (and Iolas’s) Iolas became indispensable to the artist. He sold pieces to European collectors like the Karpidases, supporting Warhol’s market when it was flagging. In 1984, he commissioned a major group of works from Warhol based on da Vinci’s painting The Last Supper. “He would bring in a lot of people in to buy things when the market was relatively flat for Warhol,” said Mr. Dannatt, “around the time of the Basquiat collaborations.”

Warhol made several portraits of Iolas before the dealer died of AIDS in 1987. The one at Kasmin was painted in 1974. “He was terribly vain,” Mr. Dannatt said. “He had so many facelifts that [artist] Bill Copley said you don’t know what planet he’s from, let alone what age he is. … He sent [the portrait] back. He said ‘This is terrible! You have to make me look younger.’” Warhol did.

What survives Iolas, and makes him something of a model for dealers today, is his personality.  “He was so charming and he had such a rapport with all the artists he was working with,” Mr. Fremont said. “He got involved with them and gave advice.  He was a showman and that is how you promote art in a lot of ways. Theatricality. He was such an unique individual. Unforgettable.” 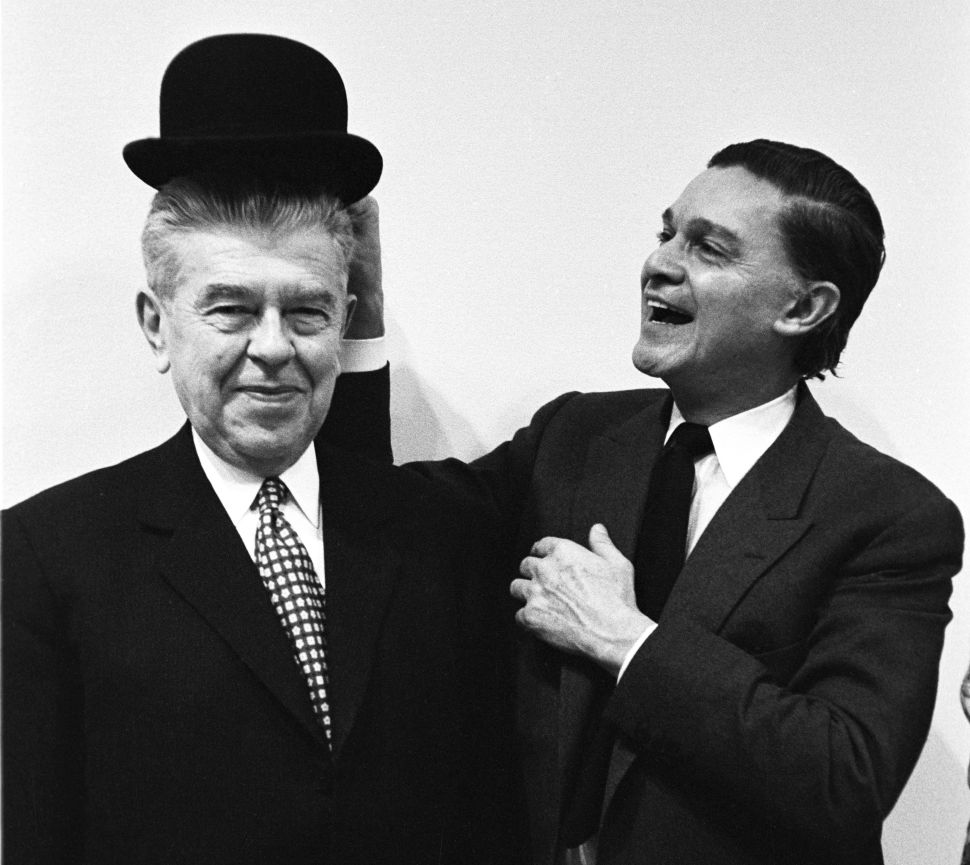