Time and tide wait for no man, but Tyne Daly will give you an argument in Mothers and Sons, the new Terrence McNally play bowing March 24 at the Golden Theatre.

“People don’t change—that’s one of the lies we tell ourselves,” her character, Katharine Gerard, rages at the lover of the son she lost to AIDS. And she’s living proof of that, standing there as rigid and classically self-contained as she was when we first encountered her two dozen years ago this month in an American Playhouse telecast of Andre’s Mother, when she was played by the late Sada Thompson. (For a nanosecond, in the freeze-frame that starts the new production, you would almost swear Ms. Thompson has arrived to take over the role—that’s how exact an artist Ms. Daly is.)

This Katharine has made progress since Mr. McNally created her—mute—in his eight-minute monologue for a 1988 anthology called Urban Blight at Manhattan Theater Club. The scene was a memorial service for an AIDS fatality, attended by victim Andre’s mother, his partner, Cal, and Cal’s father and sister. When the father and sister leave, Cal tries to speak to Andre’s mother, who won’t respond, unable to share her grief with the man she feels is responsible for her son’s death.

In 1990, Mr. McNally turned the above into a 50-minute teleplay for Ms. Thompson, who was granted a few grudging, guilt-edged words to Cal (Richard Thomas) but otherwise remained parsimonious and sanctimonious. At the end, they managed a tearful embrace, but the concluding shot emphasized the distance between them.

That gap hasn’t diminished in the 20 years since the memorial. In Mothers and Sons, she shows up on his doorstep with an item of her son she thinks may be of interest to Cal (Frederick Weller). It isn’t, really, now that he has moved on to a legally sanctioned young husband, Will (Bobby Steggert), who has provided them, through artificial insemination of a surrogate, with a 6-year-old (Grayson Taylor). It is obvious to them that Katharine’s worldview has solidified over the years and Will can’t resist ragging on her about their son: “We’re raising Bud to be gay. That’s our only expectation for him.”

Painful and awkward as it is, Cal and the recently widowed Katharine attempt to connect with all they have left of their common denominator: a drawer full of old photographs. “I think the saddest line in the play is when Cal tells her, ‘We’re the only two people in the world they mean anything to,’” Mr. McNally remarked in a recent interview. “That was a lifetime, and nothing’s left of it now. Will and the boy represent a whole new world. That journey was made in my lifetime. I certainly know what Cal and Andre went through, and I’ve lived to see [gay] marriage and adoption and family. I wanted to look at how far we’ve come in society, so I don’t think of this as an update at all. It’s a new story. We can live a new story now.”

Mothers and Sons was, in fact, born out of those societal changes: “The Bucks County Playhouse asked me to write something for Tyne. They said, ‘We’d like to do Andre’s Mother. Adapt the teleplay for the theater, and Tyne will do it.’ I said, ‘Good.’ Then I started doing it and realized: This is silly. The world has changed so much. I want to write a new play.”

He wrote Mothers and Sons last March, and it world-premiered in June at the theater in New Hope, Pa. “You can do a play in two weeks,” Mr. McNally was delighted to learn. “Theater has gotten very leisurely of late—with endless workshops and readings and dramaturges—and sometimes you say, ‘I don’t remember what I started out writing about.’ With a new play, you write it, and it takes six months to get a reading together, and then ‘Let’s do a workshop,’ and suddenly, two or three years have gone by, and the play still hasn’t been done.”

He finished his play quickly. “It was like old summer stock. It made theater more like deadline journalism. We had two weeks rehearsal, one day of tech, one preview and whoa! But we knew we had something,” The production in New Hope was well attended, and he had time to make improvements in anticipation of its Broadway run.

Emmy discovered him first, though, courtesy of Andre’s Mother. That victory was particularly sweet, because he was up against some pretty big guns. “With the Tonys, you think, ‘Well, maybe I’ll have a chance this year,’ but with this one, I said, ‘I have absolutely no chance.’”

Now, Andre’s people are setting him up with a potential win on his more familiar Tony turf, and he’s especially pleased to see Mothers and Sons sitting pretty at the Golden where he last held court with Master Class and a Tony-winning Zoe Caldwell.

“I love being back at that theater,” he said. “There’s a reason that sort of 700- to 1,000-seat theater became popular. Plays just look better on a Broadway stage.”

There have been under-30 talk-backs after the show for the generation that missed the AIDS era entirely. “That’s why I think young audiences will enjoy it—they’re learning their history.” In that regard, he said, Bobby Steggert, the young actor who plays Cal’s husband, is especially important to the production. “He’s almost a spokesman for that generation, and he doesn’t really remember AIDS.”

Like a true dramatist, Mr. McNally leaves you guessing whether Andre’s mother will at last get in step with the times. “I have my idea of what happens at the end of this, and I let the audience have theirs,” he said. “Does she go to Rome? Does she send him a postcard? Does she become sort of a grandmother figure? Does she never see them again? Does she commit suicide? It’s better, I think, to let people have their own idea. It’s a very emotional ending. You can draw your own conclusion from it.” 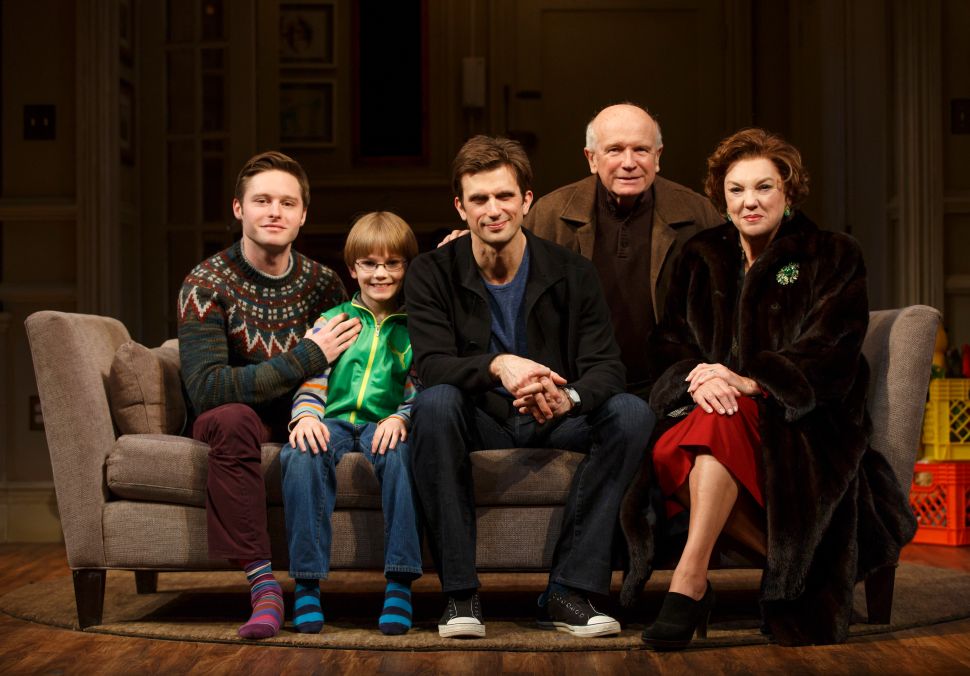