Walking through Lois Robbins’ sprawling Upper East Side apartment, you’re treated to a visual feast of artwork. A Wayne Thiebaud hangs casually in the den, while a duo of Andy Warhol prints and a Robert Longo charcoal drawing rest idly around the corner. Yet this is no gallery setting. Having raised three children here, Ms. Robbins has worked to ensure that her apartment feels nothing less than lived in.

With their last child moving out soon, Ms. Robbins and her husband, Andrew Zaro, the CEO of Cavalry Portfolio Services, are ready to renovate the apartment. The art will stay the same except for a few tweaks here and there. This home is certainly a place where arts and entertainment mix.

Do you select art with an idea of where you want to put it in your home, or buy first, plan later? I don’t know. What does draw people to art? There’s a piece in our house in the Hamptons—it’s an 8-foot-tall man, by an artist named Evan Penny. And people have either been completely repelled by him or fallen madly in love with that piece. My kids were terrified of it in the beginning.

You have a standout piece of abstract expressionism in your relatively tame living room. How did that come about? It’s a work by a postwar artist named Hans Hofmann, from a series he called “Phoenix.” I just fell in love with his work and searched for a while to find a painting. I found this one. The first few weeks we were here, my husband and I would come and sit in the living room and stare at it. We were so in love with it.

There is an interesting mix of design elements in your home. How would you describe the overall look? I would say traditional, mixed with unusual elements such as pony hair rugs. I wanted sort of a sort of Downtown feel uptown; those rugs say that for me. You own so many wonderful paintings. Any regrets? I think art, if you’re going to do it right, takes time to understand. One of my sisters is an incredible collector, and I’ve learned a lot from her. Early on in our collecting, my husband and I bought a Keith Haring. I keep it behind the door, because we don’t love it that much.

What sort of advice would you give to someone decorating an apartment for the first time? Really know what your style is. Read lots of Architectural Digests and design magazines, and tear out pages of things that you like. You need a color palette that you want to work with. A Chuck Close self-portrait leans against the wall of the dining room. (Photo by Emily Anne Epstein.)

Were there any other elements you felt just had to be incorporated in your home? I’m all about comfort, too. It should look beautiful, but you want places you can live in, not shrines or museums. It’s nice to have nice things around you, but ultimately you want to live in your home.

There are so many lovely knickknacks, from egg cups to the collection of English pitchers to a vast assortment of statuettes. Any favorites in particular? I love my antique lady head vases. They’re from the ’50s, and I started collecting them, because I was fortunate enough to see them in Evelyn Lauder’s house in Palm Beach for a weekend. She had, I think, the largest collection of these in the world.

You’ll be redoing your apartment soon. When you take a deep breath and dive into the renovation, what kind of look will you be going for? It will be more minimalist, less clutter. I want a more contemporary feel. I might even put a pool table at the other end of the room—just a little more fun.

You and your husband are philanthropically involved, and you’ve played host to quite a few benefits here. What’s up next? I’m getting ready to do a very exciting one for Ed Markey on April 11. He’s running for senator of Massachusetts. Carole King is coming to do the entertainment. I’m involved with Oceania and the Plastic Pollution Coalition, and Ed Markey is on top of all that. Ed reminds me of my brother-in-law, Senator Frank Lautenberg, who passed away last year. I want to support Ed for re-election. 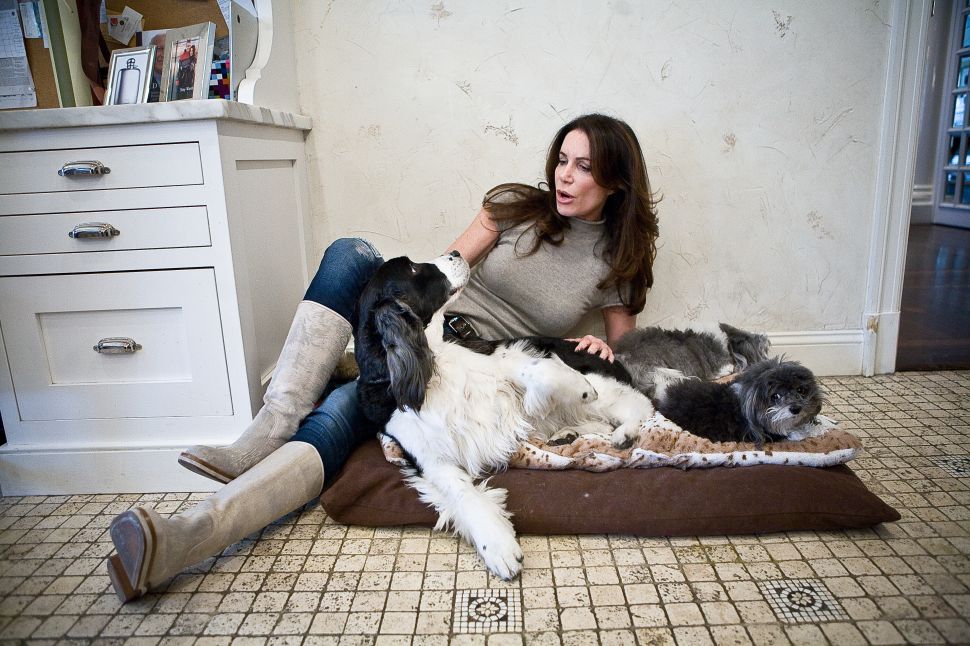