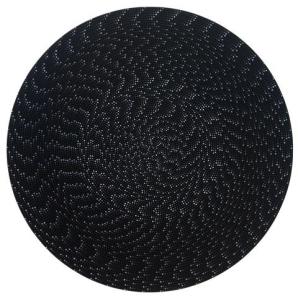 Michelle Grabner curated the fourth floor of this year’s Whitney Biennial–a.k.a. David Foster Wallace’s Artistic Debut at a Major American Museum. Ms. Grabner, a fellow Midwesterner, is responsible for the display of the author’s notebooks from around the time of his final, unfinished novel, The Pale King, on loan from the Harry Ransom Center at the University of Texas. (There’s other stuff, too! I just can’t get over that 2014 is the year the art world learned how to read, which is the facile explanation I’m going to give myself for all the authors and poets currently on view at the Whitney. The wall text for Wallace’s notebooks says: “Wallace, who was raised in Bloomington, Illinois, is a vital inclusion in the Whitney Biennial not only for his Midwestern roots, shared by many artists in curator Michelle Grabner’s section, but also for the ethical nature of his creative output.” Uh, Respectfully disagree, wall text. I think Wallace subverted morality by burying it under a stylistic veil, and he once said “the capital-T Truth…is about making it to 30 or 50 without wanting to shoot yourself in the head.” For his part, Wallace took his own life at the age of 46 in 2008 and apparently contributes now to What Contemporary Art Is, according to one museum.)

Anyway, I digress. Tucked inside James Cohan Gallery’s booth at the Armory Show this week is a delicate reminder that Ms. Grabner is also a talented artist. Her increased profile as a curator certainly couldn’t hurt in unloading these works on collectors, but Elyse Goldberg, senior director at the gallery, said Ms. Grabner curated a floor at the Biennial “just by serendipity.”

Ms. Goldberg described her style as “pattern and repetition, which is really order and chaos.” Her paintings are meticulous but random. A circular canvas covered in small dots of paint has what appears to be a kind of cosmic order, but is really just guided by the movement of Ms. Grabner’s hand. Another work, Oyster, a carefully patterned silver panel suspended in the air, is bare on one side, and on the other becomes a tack board of sorts, which the author has covered with personal ephemera.

“She has a huge following in the Midwest,” Ms. Goldberg said. “It’s hard for people in the Midwest because we’re coastal. Sometimes you don’t get to know about these artists, but the Biennial will bring her to more people.” The works are for sale, which (at the very least), one can’t quite say about Wallace’s notebooks.