HACKENSACK –  The nomination last week of Ridgewood Councilwoman Bernadette Walsh and Ridgefield attorney Robert Avery to run for two freeholder seats this year on the Bergen County Republican Organization line helped set up the chessboard pieces for the county-wide battle for control in November.

The freeholder electoral struggle will play out against the bigger battle for Bergen County Executive to be waged between Republican incumbent Kathleen Donovan, of Rutherford, and Freeholder Jim Tedesco, the former mayor of Paramus.

Bergen County Republican Chairman Bob Yudin felt that the GOP freeholder candidate picks from Ridgewood and Ridgefield “can only help” the Republicans’ chances in the fall.

“Ridgefield is in the heart of a Democratic area, yet the delegates picked somebody from that area, a former council president, who we believe can win,” Yudin said. “Ridgewood is not necessarily a Democratic town, but lately has voted Democratic. So running a candidate from Ridgewood is a good thing for us. Bernadette Walsh is an incumbent councilwoman, and she is a proven vote-getter.”

But Bergen County Democratic Chairman Lou Stellato felt confident that that the towns where his candidates come from will help hold off the GOP.

“Fort Lee and Fair Lawn are two of the larger towns of the 70 communities that make up Bergen County, and we need them in the win column. The demographics of Fair Lawn have changed, so it’s a not a given result for any one party there,” Stellato said. “But the demographics of Ridgewood have also changed. Cory Booker won Ridgewood [in the 2013 special U.S. Senate election]. And even if you lose by less than what you are projected to lose by in certain towns, that’s a victory.”

Ben Dworkin, the director of the Rebovich Institute for New Jersey Politics at Rider University, reminded observers that in the end of any Bergen-based battle, all politics are indeed local.

“Bergen County is made up of 70 towns, and most people have no idea who the freeholders are, much less where they’re from,” Dworkin, a former Bergen County resident, said. “The hometown of any given freeholder candidate comes into play only in terms of how popular is this person in their area of the county. But when voters go the ballot for freeholder, they are most likely making a decision on whether they like Democrats or Republicans. A hot, local campaign is more likely to generate the vote in a specific town.” 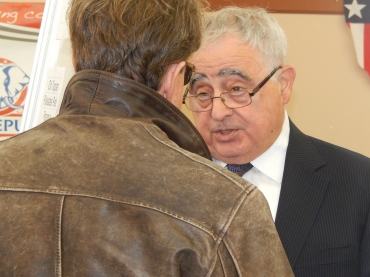