HACKENSACK – Bergen County Freeholder Jim Tedesco called Friday’s resignation by Port Authority Chairman David Samson an action that was “necessary for reform” at the Port Authority of New York and New Jersey, then called for wider changes at the bi-state agency.

“I am renewing my call for all of the New Jersey appointees who failed the state they represent, resign as well,” said Tedesco in a written statement. “During Samson’s chairmanship the Port Authority compromised the health, safety and well-being of the region that it is meant to serve.”

Tedesco was one of the first county officials to call for an investigation of the George Washington Bridge lane closures, now known as the Bridgegate scandal. He recommended in January that future county contracts with Wolff & Samson, the law firm of Samson, who was appointed to the Port Authority by Gov. Chris Christie, be halted until the conclusion of the state investigation of the scandal. The firm received close to $1 million in county contracts in recent years.

Tedesco also called on Samson to resign his position as chairman in January.

Tedesco’s comments on Samson’s resignation come a day after a law firm hired by Christie’s administration issued a report clearing the governor of any wrongdoing regarding the GWB lane closure controversy. They also come in the midst of the Bergen County Executive’s race, in which Tedesco, a Democrat, is trying to unseat the Republican incumbent, Bergen County Executive Kathleen Donovan.

Some questions pointed at Donovan since the Bridgegate scandal blossomed center on her professional relationship with Samson, who has been subpoenaed to produce documents by the state legislative committee investigating the scandal.

“I am glad that Mr. Samson has listened to the calls from the Bergen County Board of Chosen Freeholders and countless others to resign his post,” Tedesco added in his statement. “Next we need to continue to remove the culture that has existed at the Port Authority for twenty years. I have offered the Host Community Bill of Rights as a first step for the agency to restore trust and accountability, and hope that it will be adopted in the near future. Today’s news should pave the way for real reform at an agency that is in dire need of change.” 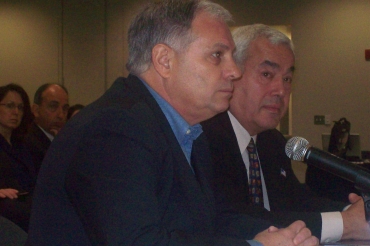