Mayor Bill de Blasio today tweaked Republican Congressman Michael Grimm for blowing off a meeting on Sandy rebuilding–after the congressman accused the mayor of refusing to sit down with him at City Hall.

“We understood that he was going to be joining us at Borough Hall last week and I was surprised he didn’t,” said Mr. de Blasio when asked why he had rebuffed Mr. Grimm’s efforts to schedule a meeting.

Mr. Grimm skipped a meeting on Sandy recovery at Staten Island Borough Hall last week and instead went to Washington, where he attended a fund-raiser featuring Justin Timberlake. His spokesman insisted at the time that the concert wasn’t the reason for the no-show, telling the Daily News that Mr. Grimm had never planned to attend that meeting, expecting little substance.”

“The people deserve action, not more hollow rhetoric, which is precisely what they got from the mayor’s visit,” Mr. Grimm told the Staten Island Advance. “Rather than waste my time getting no answers at all on Build it Back or the illusive Acquisition Program, I returned to Washington to continue the fight to pass flood insurance reform for my constituents.”

The congressman then accused the mayor of refusing to take any additional meetings with him about the Build it Back program and other elements of the Sandy recovery.

“In recent months, I gave repeatedly requested formal meetings with your office to discuss the needs to my constituents, as well as share ideas and concerns, but have not received a response. Given my inability to attend the single meeting opportunity that you have provided, I am requesting a written response to the following issues, and immediate action,” he wrote in a February 25 letter to Mr. de Blasio.

Asked today whether his reluctance to meet with Grimm stemmed from a reported federal investigation into Mr. Grimm’s fund-raising practices, Mr. de Blasio shifted the focus to the Staten Island event. (Mr. Grimm also drew headlines last month after a bizarre incident in which he threatened to throw a NY1 reporter off a balcony in the Capitol building.)

“We had a very far-ranging discussion of the things that needed to be addressed. We made clear with everyone–all the elected officials, by the way, bipartisan group in the room there in Staten Island Bough Hall–that we were coming up quickly with a plan and a new leadership approach to try to address the outstanding issues,” said Mr. de Blasio, speaking at a press conference pushing his plans to expand after-school programs.

“I’m not satisfied with where things have been left by the previous administration. We’re going to be taking some very different actions,” he added. “But we thought he was going to join us for that meeting.”

Mr. Grimm’s spokesman did not immediately respond to requests for comments. 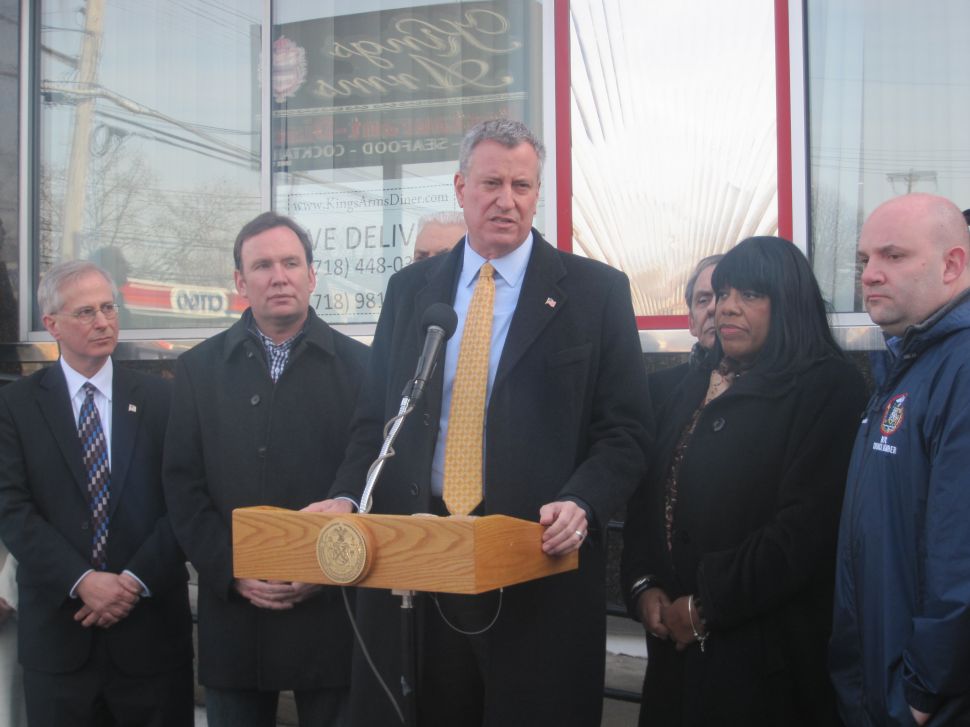