Mayor Bill de Blasio traveled to the offices of an artisanal ice cream manufacturer in Brooklyn today to sign his first bill: a law that dramatically expands the city’s paid sick day mandate.

The new bill, which will go into effect April 1, will apply to almost all workers at businesses with five or more employees, expanding the right to paid sick leave to 200,000 additional New Yorkers.

“April 1st will be day where we’ll fundamentally change the lives of hundreds of thousands of New York families,” declared the mayor, who added that he could “not be more honored” that the first bill of his administration was the expanded paid sick law.

Unlike most bill signings during previous administrations, which took place at ceremonies in City Hall’s Blue Room, Mr. de Blasio set up a formal signing desk in a large, empty industrial space inside the building.

“We thought about the perfect location for a bill signing ceremony. We wanted to generate greater public interest. We decided an ice cream company was just the right choice,” he said, later explaining suggesting that the off-campus events would be more common in his tenure. In addition to giving reporters a “live example of a great company that believes in the importance of providing paid sick leave and has had great results because of it,” he said he liked the idea of being out and about with “the people.”

“You know, I think in everything we do, we try to remember the people we serve. So although the City Hall signing ceremonies are traditional, I’m interested in being out where the people are and really exemplifying what each piece of legislation means to people,” he said.

The mayor then proceeded to sign the bill–very slowly–drawing out one letter at a time with different pens (which would later become souvenirs) as council members and advocates who backed the effort gathered around.

“Very, very elegant,” he remarked at one point as he sat at the stately desk. “This is the moment. We’re on two more letters to go.”

“It’s now law!” he proclaimed after he was done, to applause.

Mr. de Blasio told the Observer that he’d actually practiced the signing before-hand to make sure he got it right.

“Our whole life we learned in school how to do you know the script, your cursive, whatever it is. And you learn how to write your name. And you do that a long time–in my case, more than four decades since I was first taught it in school. And then one day a staffer comes up to you in City Hall and says, ‘Now don’t do that anymore. Do it one letter at a time with a different pen,'” he said. “So it did take a little practice this morning. But actually, once you get used to it, it’s a fascinating way of writing. I would not encourage it on a wide level. It would be very slow.”

Mr. de Blasio then headed downstairs to sample his host’s ice cream with David Stein, the co-founder of the company, who touted the benefits of a happy, dedicated workforce and then challenged Mr. de Blasio to figure which of a selection of flavors were made with dairy and which with a coconut milk-based substitute. After getting half of his guesses right, Mr. de Blasio raved about the “Vanilla Burnt Sugar” flavor.

“This one’s real good … This is amazing,” gushed the mayor, as he continued to dig into a personal pint. “I have to say, I have not had burnt sugar shards before. I want to strongly recommend them … It really packs a punch.”

Mr. de Blasio was soon disappointed, however when he learned the dairy-free dessert he was shoveling wasn’t actually lower in calories or fat than traditional ice cream.

“Well, I’m having a lot of spiritual and emotional health right now,” he said in consolation. “I’m convinced! If this is what workers who get paid sick days can make, this is the best endorsement you’re going to have for the concept anywhere.”

See the video of the mayor’s taste test here: 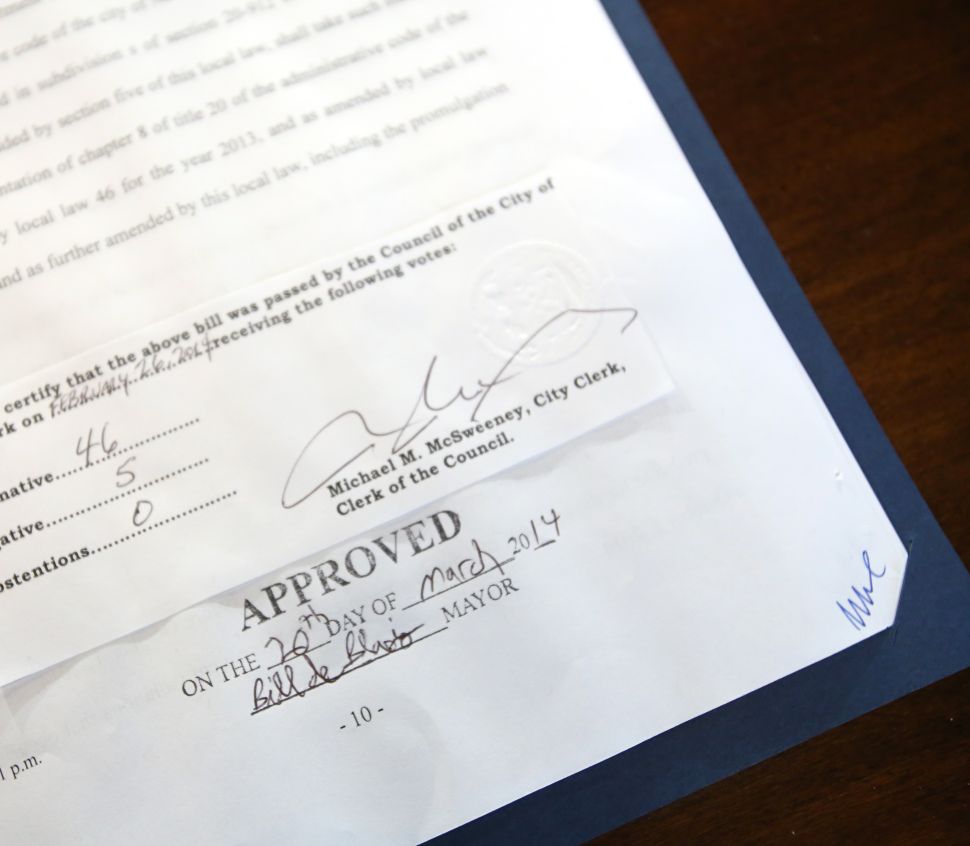