For my birthday, I found myself in a small Chicago theater, watching a young woman with yellow paint on her pasties do an elaborate performance as C3PO as part of a Star Wars-themed burlesque show. This lady had red hair and the sort of self-assured cockiness that I found both attractive and slightly cringe-worthy: the kind of person who can address the twenty or so patrons in the back-room of a bar by booming “WELCOME TO THEAAAAAAATER!” and waving her arms like she was the Phantom of the Opera.

I admired her chutzpah, and the obvious commitment her troupe had put into making this funny, self-aware burlesque parody of a classic film.

I also felt a little bad for not liking it more. I mean, I liked it more than any of the new Star Wars films (or…I guess new-er, I haven’t seen the J.J. Abrams ones yet), but I also felt squirmy and uncomfortable. Not because the women were getting naked, but because they were so…”much of a much-ness.” They were just trying so hard to incorporate Star Wars into their dance routines and be funny about it, and it just felt like “Okay, we get it. Maybe just put on the robot costume and then take the robot costume off and that would be more than enough.” Like, stop going that extra mile.

Though he did not take off his clothes, that is pretty much exactly how I felt watching Billy Dee Williams do a Star Wars-themed cha cha on Dancing With the Stars last night.

And not to put too fine a point on it, but this dance implies a Lando/Leia romance that just doesn’t exist in the Star Wars-verse. I can’t be the only nerd bothered by that, right? 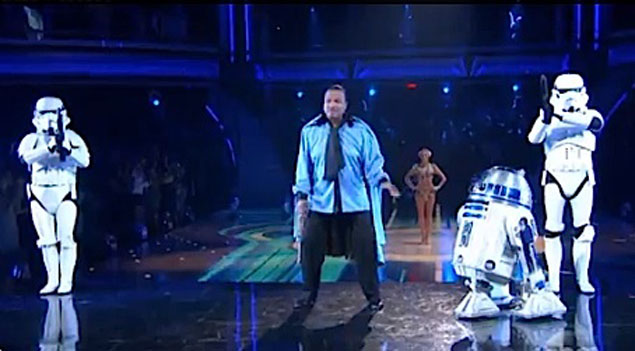