A few weeks ago I waxed enthusiastic here about how Sam from the Philadelphia band Radiator Hospital was not just a songwriter but also a music historian and a portal to the current indie DIY scene that has grown around and out of that area over the past year or so. Of course, Philadelphia has always been an independent music mecca, like Athens or Austin or Omaha or Olympia or whatever, and there will always some writerly hack wondering what’s in the and how tidily it can be bottled.

Back in the 1990s I hitched over to Philly from NYC fairly often to see bands, and the pop-tinged experimental home studio-type stuff I liked best involved names like Quentin Stoltzfus, Brian McTear and Matt Pond. I vividly remember one Fourth of July, probably after some typically drunken bloodblister of a show by The Strapping Fieldhands at Khyber, fireworks were shooting over the bridge we crossed on our way home. The air over the with the night sky ablaze seemed positively transcendent, and I decided that I would totally move to the City of Brotherly Love, where, to answer the afore-posed musical question, the municipal supply was laced with birch beer and the runoff from millions of upchucked cheesesteaks. But then I heard the Grifters and moved to Memphis instead. Oh wait, that’s another column …

So anyway, it looks like the Philly fertility has somehow been synthesized into what’s going on there today. In addition to Radiator Hospital—and I’ve just scratched the surface so far—there’s Heavy Bangs, Modern Baseball, Michael Cantor/the Ambulars and Swearin’. Not that the bands are all from there originally (RadHos came from Michigan), or even live there now (Swearin’ relocated to Brooklyn), but many of the stars in this particular constellation met there, play in each others’ bands, cover each others’ songs, live together, presumably swap recipes and clothes and some spit—the whole works.

To wit, on the fine Radiator Hospital track “Are You Feeling Me,” the guest vocalist is Allison Crutchfield, who is from Philadelphia by way of Alabama. She and her twin sister Katie Crutchfield have been in bands together and separately since they were 15, and have amassed an obsessive following. It’s a deliciously slippery slope, as these things are, so allow me to link up The Ackleys, P.S. Eliot, Waxahatchee, and Bad Banana (click them all; you’ll be so glad). Wait, what? It just occurred to me … Kate and Allie was a sitcom on CBS that ended the year Katie and Allison Crutchfield were born, apropos of absolutely nothing except that it made me giggle behind my hand for a second.

Twenty years from now, surely AMC or HBO or RFD (why not?) will air a documentary chronicling Philadelphia 2010s: The Bedroom Recording Years, but for now let’s concentrate on Swearin’, since they are on tour, playing in New York this week, and if you haven’t seen them yet, I’d like to convince you to go and perhaps even buy me a thank you drink. Maker’s Mark and you’re welcome.

Swearin’ is a band fronted by Allison Crutchfield and fellow songwriter/guitarist Kyle Gillbride, along with bass player Keith Spencer. Jeff Bolt plays drums. So far, they’ve released a 6-song cassette EP and 2 albums. I had to play a little catch-up, and met all of their stuff at the same time. The eponymous album from 2012 is largely Allison’s affair. The vocals sound like they were recorded off of an answering machine, which might be the only problem I have with this. Not because I care about pristine recording, but because I just love Allison’s voice. It’s like a perfectly woven blend of Kim Deal’s corduroy and Tanya Donelly’s qiana, so I hate to hear her vocals buried and the lyrics smeared by the otherwise infectiously fuzzed guitar sound.

Speaking of lyrics, they should include them on their Bandcamp page. It took me like 20 times through to figure out that she’s angrily chanting “I hope you like Kenosha so much you stay there!” on the standout track, “Kenosha.” “Just” is a driving power-pop romp about love on the rebound. Best song is “Hundreds & Thousands,” for the way the guitars alternately pummel and then drop for emphasis while Allison spit-sings pulp fiction-y lines like “The bluer the , the closer to Hell / Sandy rock bottom seedy motel” and something about a “Deviant officer following me.” Sheesh, I really wish I could decipher the rest.

On 2013’s Surfing Strange, the band flexes and bends a bit more, and at times they get downright math-y. The songs are darker and moodier, perhaps owing to more up-front contributions from Gillbride, and a couple songs by Spencer (bass player). Allison’s numbers still plow and hook with ferocious velocity, especially the obvious standout “Dust in the Gold Sack.” Then she strips it way down to heartwrenching effect on the bitter ballad “Loretta’s Flowers,” where she tries to explain to a friend or a lover or maybe to herself that what looked like love was not. Swearin’ gets a lot of comparisons in the press to Built to Spill, which I hear mostly when Gillbride takes over, just because he sings like Doug Martsch, but to my mind, the song structures are sort of more Kicking Giant. The psychedelic moodiness bisected by twitching melody in “Glare of the Sun” almost reminds me of Olivia Tremor Control. The band scouts the most interesting new territory on “Mermaids” with its insistent grunge verging on metal guitars alternating with spooky sparce spaciness, held aloft by a tricky dropped-beat meter, and “Melanoma,” which takes cues from the mellower parts of Guided by Voices.

We can talk obvious influences all the live-long day, and it’s clear that these folks were informed by some heavy-hitters (I’ve avoided mentioning Pavement and The Pixies, but yeah, them too). Swearin’ does that thing that only our favorite bands do: they take what they’ve borrowed and sculpt it into something new and exciting, sounding utterly familiar yet not quite like anything we already have. It’s like a master chef. I mean, we’ve all had Brussels sprouts. We’ve tasted butter or bacon, salt and pepper. We know how to turn on the broiler. But the ability to take these common ingredients and finesse tight little cabbages into something crispy, caramelized and sublime instead of a pile of bitter mealy mush? That is art.

Swearin’ plays The Cake Shop tonight and the Music Hall of Williamsburg on Friday. 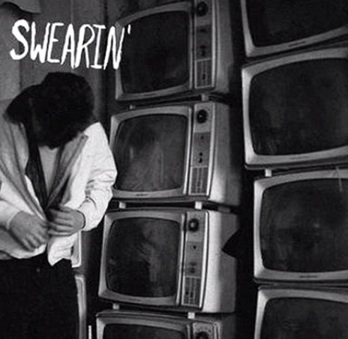