TOMS RIVER – The vaunted Ocean County Republican Organization tonight threw its support behind former Randolph Mayor Tom MacArthur in the 3rd Congressional District, cementing him as the establishment GOP pick in the Republican-leaning district and triggering a carpetbagger primary war.

On Saturday, the western Burlington half of the 3rd on Saturday likewise gave MacArthur the line, bolstering his chances in a June GOP showdown.

“Lonegan drove the Ocean and Burlington organizations together,” concluded a Democrat, who offered his insights hours before the convention. The Ocean portion of the district contains 54,267 registered Republican voters; the Burlington half 61,294.

Past primaries between the two machine operations in this district have been contentious.

The most important Republican line in the state, home to the largest number of registered GOP Primary voters (101,765), Ocean came out tonight to this Jersey Shore hotel mostly to affirm a candidate in the 3rd, having whittled a list of hopefuls from 17 down to three floor competitors.

Convention results tonight were as follows: on machine 1:

If the home county Hill scored seven additional votes he would have forced a runoff.

“Tonight, one strenuous process comes to an end and another one starts,” said MacArthur, a millionaire insurance business owner. “I want to thank the county party leadership for running a fair and open process that brought the best out of all of us. We were required to go to every town. …I gained a great deal of respect for those that were competitors in this race. There were times when Mo Hill could have given my speech and I could have given Jim Byrnes’ speech. Many of you worked very hard for someone you wanted to win. That’s what makes this such a great party.”

He introduced his wife Debbie and his youngest daughter Isabella, son David and daughter-in-law Erin.

“I think our credibility in the world is waning,” MacArthur said. “I see it even this week in Crimea. I want to pursue policies that get Americans back to work again. I want to see our military strong again.”

Given Lonegan’s presence and his promise to primary, MacArthur’s next uttrance sounded premature.

“Let’s go on to November and win this thing,” he said.

Publicly jovial in defeat, Hill was content to back his conqueror.

“Absolutely, I will support Tom,” said the retired Navy man. “I congratulated him.”

The losing candidate stood in a circle of old timers cackling bitterly about the outcome and badmouthing the victor.

Hill refused to pile on.

“He won fair and square,” he said of his rival.

In another clump outside the winners’ circle, Lonegan said the outcome didn’t surprise him.

“What you saw was the establishment picking an establishment candidate,” he said. “This district is going to become the poster child for establishment Republicans trying to push out conservatives. I have the polling. It’s in my favor. In the end, the only polling that matters is what happens on June 3rd.”

Earlier in the evening, the contest hardened.

One by one they said that they’re out.

Nominated and seconded, Berkeley Twp. Council President James Byrnes surrendered with a note of defiance in his voice at the front of the room.

“I still think I’m the best candidate for the job, but Berkeley still needs a lot of help,” said Byrnes, a Vietnam vet roughed up and thrown out of his house by Hurricane Sandy. “At the end of the day, I’m going to support our candidate 110%. I don’t want a congressman who won’t show up down the shore after Sandy.”

In the run-up to machine voting, where the winner had to attain 50% plus one in order to avoid a runoff, the three still-standing candidates worked the big room where two voting machines stood beside the podium with curtains open in preparation for town-by-town voting.

“What I’ve learned is there are great people in local office,” said retired Navy Rear Admiral Hill of Toms River, who did 30 years in the service, and ran hoping to secure the line in his home county here. “If we had people in Washington, D.C. like we have locally, things would be in much better shape.”

That goes for everyone locally?

“Well, I had a couple of people who flipped on me,” Hill conceded, frowning, acknowledging Brick Republican leaders who at the beginning of the week came out with an endorsement of MacArthur.

“I’ve also learned who my friends are,” Hill said with a grin.

One of them is Assemblyman George McGuckin (R-10).

“Mo was one of the first people who supported me when I ran for Toms River Council,” the assemblyman said. “We agreed at the time that if ever the congressional seat came up that I would back Mo, and that’s what I’m doing.”

Even some of Hill’s supporters, though, stared back grimly when asked about their friend’s chances.

“He’s going to come up short tonight,” an insider said as he watched the familiar bullet-headed Navy man push doggedly past with outstretched hand into a crowd of committee members.

Grave and stoic in the wings, Lonegan sounded like he knew he wouldn’t win. He stood in the corner of the room with his wife and a brace of allies.

He found out about the $25,000 last week. That’s how much MacArthur shoveled into Ocean County GOP coffers late last year.

“I’ve been sitting in a lot of living rooms, doing it the grassroots way,” said Lonegan, battling down a hint of bitter-tinged outrage at the money and managing a smile. “That’s how we do it.”

PolitickerNJ pressed him to see if he thought he had a chance to get the line here.

“Let’s see,” he said, referring to the coming voting, then admitting that either way, “We’re going all the way.”

MacArthur looked comfortable early as attendants galloped around the room taping red, white and blue signs on the walls with his name and the word “Congress” emblazoned on them.

He looked comfortable enough to be from Ocean County, even though he’s not, a fact that nagged at party members worried about running an outsider but ultimately convinced that the district is too Republican to risk fumbling away in an off year.

As for Lonegan and the threat of a primary – he’s not from the district either.

“So it’s carpetbagger against carpetbagger,” a MacArthur partisan said on condition of anonymity. “We can live with that.”

“I feel optimistic,” MacArthur told PolitickerNJ in between hands in the lead up to his victory.

Asked about the support that flipped his way in Brick and whether it sufficiently smothered Hill, MacArthur said, “Every town is important. That’s why so many people are here tonight.”

He gestured to the grand ballroom overhung with balloons, with red and blue napkins fluted in the glasses, packed with county committee members.

Freeholder Jack Kelly, who ran unsuccessfully in the 2008 Republican Primary for the seat in question, at the outset of the evening threw his support staunchly behind MacArthur when he personally nominated him.

“He will fight to get rid of Obamacare and balance our federal budget,” Kelly said.

PolitickerNJ asked a circulating Freeholder Joe Vicari – who received a huge roar of approval from the crowd – why he didn’t run. Kelly edged him for the nomination in 2008 and there were unsuccessful Vicari stabs at the seat in the past.

Dean of the New Jersey Congressional Delegation, U.S. Rep. Chris Smith (R-4) led the room in the Pledge of Allegiance.

Then Gilmore went front and center.

“Hopefully this is an evening where by the end everyone will support the organization candidates,” the chairman said hopefully, facing the room at large.

Lonegan – as he made clear in the hallway on his way out of the hotel – would not heed those words.

Soon, reps from the camps of the candidates would move forward across the patterned carpet to inspect the machines just ahead of the voting.

Then the voting began, MacArthur won, and Lonegan promised not to back down. 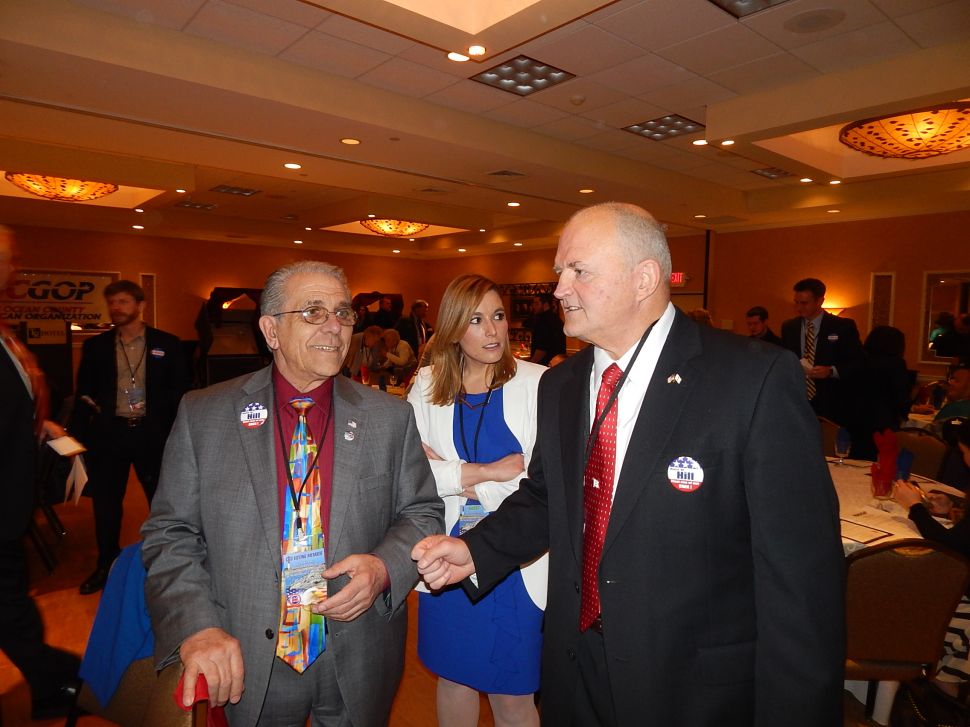