FLEMINGTON – Gov. Chris Christie addressed the George Washington Bridge controversy at a town hall event for the first time since the scandal engulfed his administration.

The governor told attendees he’s working to get to the bottom of the Bridgegate scandal and assured a mostly friendly crowd he has not been throwing himself a “pity party” over the fallout from the September lane closures.

One attendee who was friendly with the governor appeared to take issue with former top staffer Bridget Anne Kelly being fired because she lied to the governor – not simply because of her reported involvement with the lane closings.

The attendee referenced Christie’s nearly two-hour-long January news conference when he announced Kelly was fired because she lied.

“If she told me the truth she would have gotten fired too,” Christie said.

The governor then moved to another attendee who told Christie she felt bad he’s the subject of such scrutiny.

“People are getting the impression that you’re guilty before you’re proved innocent,” she said.

“At the end what matters the most to me is we find out the truth … and then we move on to do our jobs,” Christie responded. “But I can’t sit around and get into a pity party for myself.”

The governor assured the lane closures were “not approved by [him and] would never” have been approved by him.

“What happened was absolutely unacceptable and I had no idea about it,” Christie said. “And if I had, I would have not permitted it.”

The governor fielded the questions while ignoring about a dozen town hall attendees donning white t-shirts with letters spelling out “Bridgegate.”

The group sat in a row and stood up with their hands raised in an apparent attempt to ask the governor a question. They were part of the group of Christie critics who have recently been ejected from town hall events.

The governor never called on them.

The Flemington appearance, the governor’s 115th town hall meeting, came after a recent spree of protesters crashing the gubernatorial events. Christie, who is long accustomed to holding town halls in front of friendly crowds, has faced critics at two of last town events.

In Mount Laurel, at least six people were ejected from the meeting as the governor began taking questions from the audience. The protesters shouted about the George Washington Bridge controversy and the distribution of Sandy aid.

Christie faced similar critics the following week during a South River appearance in which at least a dozen protesters chanting “New Jersey deserves better” were led out of the event by police.

The governor has been referring to the protesters as being part of a “new phenomenon” of his town halls. Christie charges the protesters have been recruited by powerful labor unions in the state who he says lost at the polls and are now doing their best to disrupt the events.

The appearance of Christie critics has also caught the attention of a good-government group.

The American Civil Liberties Union of New Jersey issued a statement earlier in the week telling the New Jersey State Police to “come clean” and disclose whether they’ve engaged in photographing protesters at the events.

The statement came after PolitickerNJ reported a plainclothes individual who later identified himself as a member of the State Police was snapping pictures of protesters.

The state’s acting attorney general issued an order following the report directing the State Police not to photograph Christie town hall attendees for “security or any other purposes.” 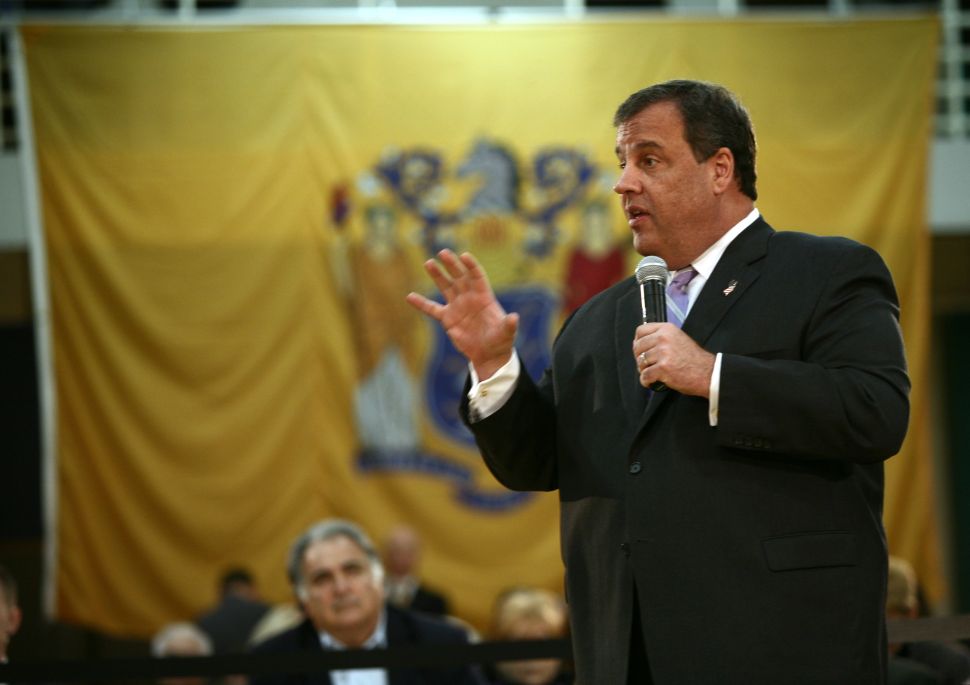